Günther Braun stepping down after 26 years at the industrial laser firm, and a decade as its CEO. 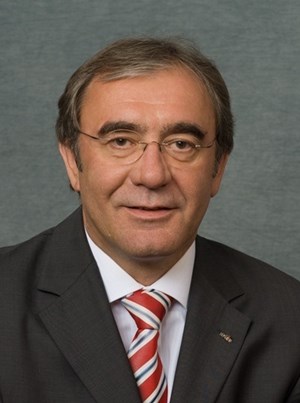 Rofin-Sinar, the Nasdaq-listed industrial laser company with twin headquarters in the US and Germany, has appointed a new CEO to lead the firm.

Thomas Merk, currently chief operating officer of the company’s laser micro and marking division, will replace long-time incumbent Günther Braun at the start of July. Although the 57-year-old Braun will stay with the company during the transition period, the switch comes almost exactly ten years after he was appointed CEO and president – and a remarkable 26 years after he first joined Rofin.

Merk is also a long-time executive, joining the firm in 2000 and serving as managing director of Rofin-Baasel Lasertech before stepping up to become COO of Rofin’s “micro” group in 2005 and adding the laser marking business to his portfolio the following year.

Peter Wirth, chairman of the Rofin-Sinar board of directors, said of the impending change: “We are now entering a new phase of the company’s development and we will continue to focus on innovation while taking a firm, bottom-line approach that will accelerate our competitive advantage and build value in this market.

“We have chosen Thomas to be our new CEO because of his contributions and demonstrated leadership. He has deep experience in the laser industry, business vision and financial acumen.”

Third-gen fiber modules key
One of the key trends in the laser materials processing sector is the emergence of fiber lasers, which are challenging more traditional gas and solid-state laser sources in virtually every application area.

Rofin-Sinar has to some degree been playing catch-up with the fiber laser specialist IPG Photonics, but over the past couple of years has begun to see the fruits of its development work in this area. Now able to produce much more powerful, compact and cost-effective fiber laser modules, and with fast-growing use of its internally sourced laser diodes, the company is able to compete more effectively with IPG.

Last month, Longbow Research analyst Mark Douglass reported that Rofin was gaining “significant traction” with its third-generation designs, with orders and sales growing extremely quickly. “[Rofin] had orders for 130-plus high power units in [its fiscal second quarter] and sounds confident that it can ship its target 300 units in [fiscal year 2015],” he wrote in a research note.

Douglass added that while the widespread investment by automotive manufacturers was positive for a variety of industrial laser applications, Rofin might even start to realize some growth at the expense of IPG Photonics if it continues to perform well.

“Not content to rest on its laurels, [Rofin] has more technology innovations that should continue to drive down its high power fiber laser costs, knowing it has very strong competition,” reported the analyst.

Customer reach
Paying tribute to Braun in a company release, Wirth said: “During his tenure, he made a considerable contribution towards strengthening Rofin’s strategic position and has led the company through many phases of technological innovation, most recently the successful introduction of our third generation of high-power fiber lasers.”

In the ten years since Braun took over the helm – initially on an interim basis after prior CEO Wirth suffered a stroke in early 2005 – the company’s annual sales have risen from $322.6 million (fiscal 2004) to $530.1 million in fiscal year 2014. For the current year, Braun and colleagues are expecting to post sales of around the same level, despite the adverse currency effects of the strong US dollar.

However, those figures mask something of a roller-coaster ride in between, with then-record sales of $575.3 million in 2008 followed by a slump to $349.6 million the following year, in the wake of the global financial crisis, before bouncing back to $597.8 million in fiscal 2011.

The outgoing CEO said of his time in charge: “It was a great pleasure to manage the fortunes of Rofin for such a long time, and I wish Thomas all success in the leadership of Rofin.”

53-year-old Merk added: “I am excited to lead [Rofin] in its next chapter of growth and development. As the company with one of the greatest customer reaches in the industry and a strong product portfolio that includes some of the most advanced fiber-laser technology as well as a wide ultra-short-pulse laser portfolio in the market, there is significant opportunity ahead to drive growth and further margin improvement.”