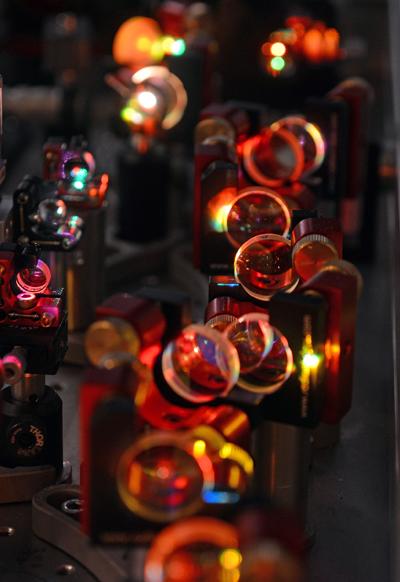 The new laser could become a standard tool for research in attosecond physics.

Physicists at the Laboratory for Attosecond Physics (LAP), part of the Max Planck Institute for Quantum Optics, Garching, Germany, have developed a new laser-light source, which they say that will "lead to significant advances in research on fundamental physics". The team describes the new instrument in Nature Communications.

With the aid of extremely short and highly intense pulses of laser light, LAP scientists say they have made “great strides” in their efforts to observe and control particle motions outside the confines of atomic nuclei.

The team says, "the future of electronics will lie in the optical control of electron flows to enable data processing operations at frequencies equivalent to the rate of oscillation of visible light – some 100,000 times faster than is feasible with existing techniques."

Most lasers utilized in research laboratories are based on titanium:sapphire (Ti:Sa) crystals, a type of instrument that has been the dominant tool for production of ultrashort light pulses for over 20 years. But this situation is likely to change very soon, says the LAP team. All the indications are that thin-disk laser systems will soon displace their older rivals, which employ rod- or slab-like crystals.

The team at the LAP has now introduced the Ytterbium:Yttrium-Aluminium-Garnet (Yb:YAG) disk laser. This source emits pulses lasting 7.7fs, which corresponds to 2.2 wave periods. The laser's average power is 6W, with each pulse carrying 0.15 microjoules of energy - 1.5 orders of magnitude greater than is attainable with commercial titanium:sapphire lasers.

Physicists can already control the waveform of the emitted pulses with considerable precision, but the new system extends this capacity even further. Fine control of the temporal shape of the electromagnetic fields of the light waves is indispensable for their use in the switching of electron flows in condensed matter, in single atoms, and hence for optoelectronics.

Secondly, pulse length must be limited to a few femtoseconds. Previous experiments carried out by the team showed that it is indeed possible to switch electric currents on and off using specially-shaped electromagnetic wave packets, known as phase-controlled laser pulses. However, the maximum switching rates achieved in earlier experiments were only of the order of a few thousands per second.

This limit has now been spectacularly breached. The new laser is capable of producing tens of millions of high-power pulses per second, and it ushers in "a new era in the investigation of ultrafast physical processes," says the team. With the advent of the new laser, atomic photography moves into a new phase. Characterization of rare events in the microcosmos with the Ti:Sa systems now used in attosecond laboratories requires observation times of hours or even days, assuming they can be captured at all. The new instrument improves data acquisition rates by a factor of between 1000 and 100,000.

The new generation of lasers could also be utilized to explore the elementary processes that underlie natural phenomena. The scientists say that the new tool will soon be able to generate pulses of high-energy light, with a wavelength of 60nm, in the extreme ultraviolet segment of the spectrum. Such pulses are sufficiently energetic to excite helium ions, which would allow the frequency of the associated emission to be precisely determined with the frequency-comb technique, for which Prof. Theodor Hänsch won a Nobel Prize in Physics in 2005.

In the Nature Communications paper, the team concludes with some comments on the power scalability of the new laser: “Carrier Envelope Phase stabilization with an intra-cavity acousto-optic modulator can be used in a wide range of intra-cavity peak powers. Provided that the laser noise spectrum remains comparable, we expect that an increase of the intra-cavity peak power from currently 40 MW to more than 400 MW is possible without compromising stabilization performance.

”In summary, the source reported here delivers an order of magnitude higher average power and pulse energy than any other CEP-stabilized oscillator demonstrated so far, opening new prospects for few-cycle nonlinear optics, as well as attosecond physics and precision metrology.”