Optics sales take a dip at Jenoptik ahead of restructure 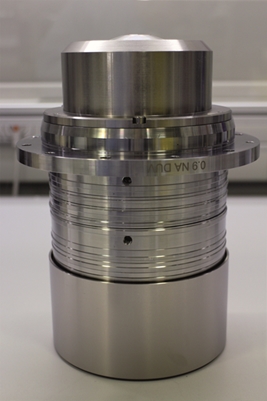 German optics giant Jenoptik has reported an overall increase in group sales for the opening quarter of 2015, despite a slump in revenues within its largest business unit – lasers and optical systems.

Ahead of an organizational restructure that will see the company's divisions aligned more closely with its key application sectors like medical, automotive and semiconductor manufacturing, CEO Michael Mertin said that the year had begun as expected.

He is still anticipating a significant increase in full-year revenues, even though in the opening quarter Jenoptik’s lasers and optical systems division reported a 5 per cent decline in revenues to €56.2 million.

That slump – attributed to relatively weak demand from the all-important semiconductor sector - was outweighed by 14 per cent growth across the company’s defense and metrology units. Overall, Jenoptik’s group sales jumped 6.4 per cent to €145.8 million in the opening quarter.

Perhaps more encouraging in terms of optics and photonics is the company’s order backlog, which stood at €447.4 million as of March 31. That figure includes €108.3 million worth of orders for lasers and optical systems – up 7 per cent from the end of 2014.

In contrast to the semiconductor sector, Jenoptik said that its business in laser systems and optoelectronic modules had got off to a strong start this year, partly the result of demand from medical applications.

Mertin and the Jenoptik board of directors also confirmed the firm’s revenue expectations for 2015, of between €650 million and €690 million. That would represent a sharp increase on the €590 million posted in 2014, although that is partly the result of recent acquisitions and delayed revenues from a defense-related project originally expected last year.

Automotive shift to China accelerates
In their quarterly report, Jenoptik’s management team said that the group’s annual sales should grow to €800 million by 2018, something that ought to be aided by the re-organization of the business around specific market sectors.

One of those key sectors is the automotive industry, where major changes are expected as China becomes a more influential base. Mertin and colleagues referenced a recent study by Boston Consulting that highlighted the growing pressure on automotive suppliers to meet the international reach of their auto manufacturing customers while simultaneously implementing cost-saving measures.

“Over the next five years, the number of main German plants could shrink from 46 to 39, while the number of factories in China rises from 15 to 25,” they wrote. “The key to success for car manufacturers and suppliers, say analysts from McKinsey, are luxury-class vehicles and the Chinese and US sales markets.”

• Jenoptik CEO Michael Mertin, who is also president of the Photonics21 industry group, is due to present an update on the Horizon2020-backed public-private partnership (PPP) in photonics at next week’s Photonics21 annual general meeting.

Other speakers on the agenda include SPIE CEO Eugene Arthurs, and the European Commission’s head of photonics and organic electronics Wolfgang Boch. They are set to be joined by Günther Öttinger, the new European Commissioner for the Digital Economy and Society, who replaced Neelie Kroes in that role last year.

In contrast to previous years, the AGM’s break-out sessions will be organized around the theme of societal challenges rather than technology areas, for example focusing on “smart” cities, security, and health.

The Photonics21 AGM agenda is available to download here (as a .pdf file).