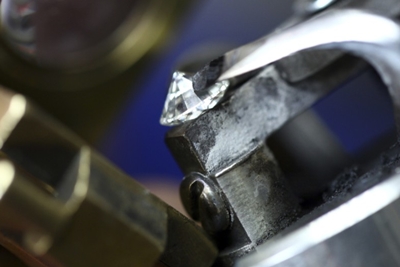 De Beers, the world’s largest diamond producer by value, has acquired a 33.4 per cent equity stake in the Swiss laser equipment company Synova.

The two firms are set to collaborate on a fully automated cutting and shaping system for processing diamonds, based on the proprietary water-guided laser microjet (LMJ) technology developed by Synova.

De Beers, which is part of the giant London-listed Anglo American Group of mining companies, says that it sees the laser technology as a way to achieve higher yields of cut diamonds from rough stones, as well as reducing the risk of damage during cutting. It also promises to speed processing times.

Philippe Mellier, the De Beers CEO, said in a company announcement: “This investment is another example of our continued commitment to technology. We believe this new cutting technology has the potential to play an important role in the diamond industry, as efficiency becomes ever more important for diamantaires.”

In a separate announcement, Synova’s long-time CEO Bernold Richerzhagen added: "The new partnership with a major market player like De Beers will not only help ensure Synova's long-term growth, it will also provide Synova with a unique opportunity to further improve market penetration of the LMJ technology in the diamond processing industry worldwide and to be close to the business."

Lausanne spin-out
Founded in 1997, Synova is a spin-out of the Swiss Federal Institute of Technology in Lausanne. It has been targeting diamond cutting applications since 2010, and formally launched a dedicated diamond cutting machine the following year.

Then in 2013 the company said that it had received a surge in orders for its diamond cutting machines, also installing one at its own service and demonstration center in Surat, India.

Both its DCS 150 and DCS 300 machines are based around a pulsed frequency-doubled Nd:YAG source operating at 532 nm. Synova says that by guiding the laser along a thin jet of water, the cut produced in the diamond is parallel-sided rather than V-shaped. “The water prevents thermal stresses building, so reducing the tendency for stressed stones to crack,” it has previously claimed.

Although the two companies did not disclose the value of the new De Beers equity acquisition, back in 2011 Synova did attract a large chunk of private equity financing, striking a deal worth up to CHF20 million with Holland Private Equity (HPE). The group was backed by a major European pension fund and also the European Investment Fund.

De Beers is also involved in the optics and photonics business through its UK subsidiary Element Six, which manufactures synthetic diamond components for industrial applications.

It is expecting to benefit from a significant uptick in business as the market for extreme ultraviolet (EUV) lithography tools being developed by ASML gathers momentum. The tough diamond optics developed by Element Six and others are needed to withstand the colossal laser powers that are used to generate EUV light in the plasma sources of the tools.