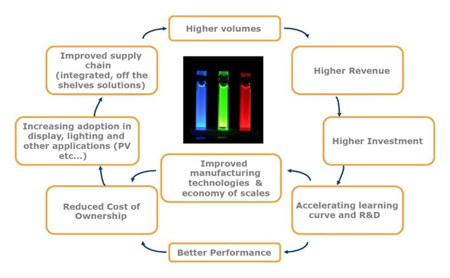 It presents a detailed review of the industry, especially the impact of the development of quantum dots on the display and conventional phosphors industry. Yole asks, are quantum dots now a serious competitor to OLED-based technologies - and its conclusion is: quantum dots are finally ready for prime time and will exceed traditional phosphor revenue by 2020 by allowing LCD to compete with OLED in the race for the next generation of displays.”

After the lukewarm reception of 3D and 4K screens, Yole comments that the display industry needs a “new and disruptive experience improvement” to bring consumers back to the stores: “image quality perception increases significantly when color gamut and dynamic contrast ratio are improved.” Yole also notes that “Leading movie studios, content providers, distributors and display makers have together formed the UHD Alliance to promote those features.”

Dr Eric Virey, Senior Analyst, LEDs at Yole, commented, “OLED was believed to be the technology of choice for this next generation of displays. But production challenges have delayed the availability of affordable OLED TVs. LCD TVs with LED backlights based on quantum dot downconverters can deliver performance close to, or even better than OLED in some respects, and at a lower cost.”

QD-LCD 'could pull ahead' of OLED display

Until OLEDs are ready, says Yole, “QD-LCD technology will have a unique window of opportunity to try to close enough of the performance gap such that the majority of consumers will not be able to perceive the difference between the two technologies so price would become the driving factor in the purchasing decision.” Under this scenario, the analyst believes that QD-LCD could establish itself as the dominant technology while struggling OLEDs “would be cornered into the high end of the market.”

With tunable and narrowband emissions, QDs offer design flexibility to developers of new displays. But more is needed to enable massive adoption, including the development of cadmium-free formulations. Cole cautions that "traditional phosphors still have to say their last word". If PFS could further improve in term of stability and decay time and a narrow-band green composition was to emerge, traditional phosphors could also be part of the battle against OLED, Yole concludes.