Plenary talk by retired US Army colonel and engineer David Brown calls for “technology surprises” through science and engineering. 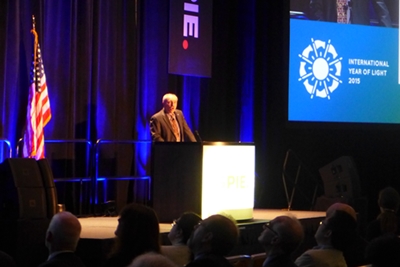 That was the message from plenary speaker David Brown, Deputy Assistant Secretary of Defense for Developmental Test and Evaluation at the US Department of Defense (DOD), as he addressed the SPIE Defense, Security and Sensing event taking place all this week in Baltimore, US.

Brown, a retired US Army colonel whose credentials include an adjunct professorship at Johns Hopkins University and a PhD from the University of Delaware, knew he was speaking to the right audience. An engineer himself, Brown said he has had a long acquaintance with SPIE.

Changing times
The nature of conflict has changed in some significant ways, Brown told his audience. From now on, conflict will occur in the commons - areas that have no domain owners - and will involve state actors as well as non-state actors.

And although technology “offsets”, the word used by the military to define supremacy over any adversary, will continue to be important, they will be of different sorts than the asymmetric capabilities that the US built in the late 1950s, or the “own-the-night” emphasis of the 1980s.

Challenges in this era, which Brown described as “the rise of the commons,” include modern electronic warfare, ballistic and cruise missile defense, precision navigation and timing, communications, intelligence surveillance and reconnaissance, integrated air defense, cyber threats, and weapons of mass destruction.

At the same time, the DOD is concerned that a return to budget sequestration would cause delays or cancellation of capabilities under development, Brown added, listing programs such as the Aerospace Innovation Initiative, Next Generation Adaptive Engine, Ground-based Interceptor missile defense system, and space control efforts. 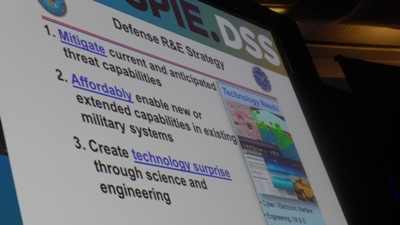 To help mitigate threats, there is a need to develop affordable new and extended capabilities in existing systems, and create “technology surprise” through science and engineering, Brown said. The US will also need to work toward a smaller, leaner, more technologically advanced military, he added.

Returning to the area of his audience’s expertise, Brown said that highly sophisticated sensors of several types - electro-optical and infrared, acoustic, seismic, magnetic, and radio frequency - would all provide valuable capabilities. “Share your ideas,” he invited.

The award recognizes Tuell’s research and development of bathymetric lidar and data fusion, and his efforts to further advance airborne lidar remote sensing, for example with real-time calculation of total propagated positioning error.

• Kenneth Long of the University of Illinois at Urbana-Champaign and William Hoving from the Leiden Observatory in The Netherlands both presented on advances in the hot area of smartphone spectroscopy.

Long showed how the technique could identify peanut allergens in cookies, identifying cross-contamination between different batches of baked goods, while Hoving detailed the iSPEX spectrometer’s ability to monitor aerosol levels in the atmosphere. 10,000 of the spectrometers have been issued to volunteers in The Netherlands to build up a picture of aerosol concentrations across the country.

• Keynote speaker Panos Datskos from the Oak Ridge National Laboratory presented on a new spectroscopy system featuring four quantum cascade lasers that is able to cover a very large chunk of the mid- and far-infrared spectrum.

That broad wavelength coverage allows for the detection of a wide range of hazardous chemicals at very low concentrations, as well as an imaging array showing exactly where those chemicals are.

However, optical techniques are not well suited to everything, with Starmark co-founder and CTO Franklin Felber saying that the only safe way to sense people lurking behind metal walls – for example stowaways hiding inside shipping containers – is to use acoustic wave interference to show up any movement.

Amy Nelson is manager of public relations at SPIE.