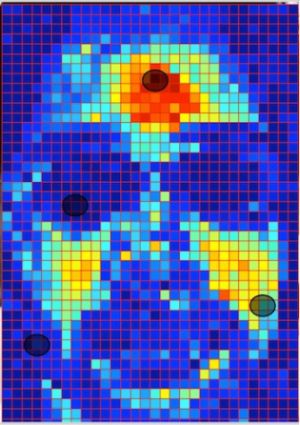 Written all over the face

Changes in a person's health can manifest themselves in many different ways, including subtle variations in flesh color as the blood volume underneath the skin alters minutely.

Using a camera to spot these changes on a human face has been an attractive non-contact diagnosis technique for some time, referred to as photoplethysmography (PPG).

But some fundamental problems have limited its applicability: not only does it require the patient to remain as still as possible so as not to disturb the measurements, it can also be challenging to apply the method to darker skin tones.

A team at Rice University has now developed a means to tackle these obstacles, and believes that its platform could open up new avenues of application for the technique in clinical and consumer markets.

The project was supported by the National Science Foundation and the Texas Instruments Fellowship, and the results were published in Biomedical Optics Express.

"Our key finding was that the strength of the skin-color change signal is different in different regions of the face, so we developed a weighted-averaging algorithm," said Rice University's Mayank Kumar.

"It improved the accuracy of derived vital signs, rapidly expanding the scope, viability, reach and utility of camera-based vital-sign monitoring."

Webcam diagnosis
In the BOE paper, the team outlined how combining the color change signals from different regions was implemented alongside a new method to improve the signal-to-noise (SNR) performance of camera-based PPG signal detection, and a way to track different regions of the face separately as the person moves in front of the camera.

According to the team's results, this three-fold improvement on existing systems increased the overall SNR by an average of 4.1 dB compared to prior methods, and delivered an improvement of 6-7 dB when applied to non-white skin tone. It performed better in low-light conditions, and also coped with scenarios in which subjects were talking rather than remaining stationary.

The Rice University system, christened distancePPG, could now prove its worth in several scenarios - for example by allowing premature infants to be closely monitored in intensive care environments, where wired probes or other physical sensors are either impractical or ineffective.

Kumar said he ultimately expects the software to find its way onto mobile phones, tablets and computers, enabling people to reliably measure their own vital signs whenever and wherever they choose.

"We are in the process of developing a real-time PC-based application to robustly estimate PPG signal using a webcam," said the team. "Future work includes porting our code to popular mobile platforms including Android and iOS, and further improving the performance of distancePPG under motion scenarios."