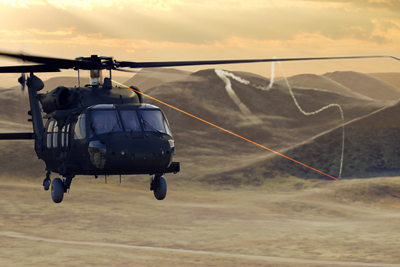 British multinational defence, security and aerospace company BAE Systems has announced that its Advanced Threat Infrared Countermeasures (ATIRCM) system has been approved for export by the US Department of Defense. The company commented, “This approval paves the way for sales to allied nations around the world, giving them access to this life-saving technology.”

ATIRCM utilizes BAE Systems’ Common Missile Warning System to detect an incoming missile and communicate the missile’s position relative to the aircraft. ATIRCM then locates and tracks the incoming threat and emits a high-energy laser beam to defeat the missile’s infrared seeker, effectively blinding its guidance system and preventing it from homing in on the aircraft.

Bill Staib, director of threat management solutions at BAE Systems, commented, “In today’s environment with the proliferation of surface-to-air missiles, a proven aircraft survivability system to counter advanced threats meets an immediate need. We are seeing tremendous international interest for this system, which has proven to be both highly effective and reliable since its launch in 2009.”

Developed in partnership with the US Army and currently deployed on military helicopters, ATIRCM has proven to be highly effective in protecting both rotary and fixed wing aircraft. Deployed on mission critical US Army helicopters in Iraq and Afghanistan since 2009, the latest Army report states that ATIRCM’s reliability surpasses the Army requirement "several times over".

The topic of potential changes to US export restrictions on military or defence-related photonics technologies was considered, last month, at a roundtable discussion at SPIE's Photonics West 2015. The US Government requires all manufacturers, exporters, and brokers of defense articles, defense services or related technical data to be ITAR-compliant (International Traffic in Arms Regulations).

The meeting aimed to collect input on areas of concern. Both US and non-US organizations working with ITAR related issues participated. Industry representatives and others interested in the impact of the USML rule changes were invited to attend the roundtable, held in San Fransisco on 10 February.

As event organiser, SPIE noted, "Publication of the proposed regulation for this category in the Federal Register is expected in early 2015, with an open community comment period to be announced in the Federal Register. Category XII is important not only to the military and industry, but also to research universities that accept Department of Defense funding and manage the unique challenge of complying with all categories of controls."