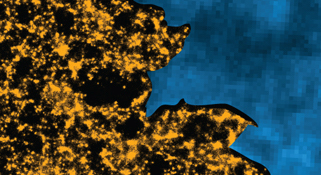 STORM in action: a clearer view

An understanding of the ways DNA is packaged within different cells has been built up over several decades, allowing researchers to appreciate some of the subtleties of genome design.

In many cells the basic building blocks are nucleosomes: DNA segments wound around protein cores. These are in turn formed into structured macromolecules called chromatin, which adopt different configurations in different environments and help to efficiently compact the cell's DNA information into a small volume.

The distribution of DNA along chromatin fibers has been likened to beads on a string, but getting a clear look at exactly how that string is constructed in vivo has proven troublesome. X-ray diffraction and electron spectroscopy can fill in some of the gaps, but the fine detail of the organization is difficult to resolve.

A cross-disciplinary project involving Barcelona's Institute of Photonic Sciences (ICFO) and Centre for Genomic Regulation (CRG) used STORM to image chromatin fibers in cells, building up a quantitative picture of both nucleosome distribution and how it changes as a function of cell state.

Allied to some innovative computational simulations, a STORM analysis of several different human and mouse cells revealed that the nucleosomes are grouped in discrete clutches along the fiber, with areas of relative depletion between them.

The project also found a correlation between the distribution and size of the nucleosome clutches and cell pluripotency, identifying different levels of DNA packaging depending on the specialization of the cells. In a paper published in Cell, the team note that ground-state pluripotent stem cells had less dense clutches containing fewer nucleosomes, and that clutch size strongly correlated with the pluripotency potential of induced pluripotent stem cells.

A structural understanding of the pluripotency potential demonstrated by different stem cells could be highly significant, and a joint patent now filed by ICFO and CRG is intended to form the basis for future commercial development of this finding.

Three pioneers of super-resolution microscopy were joint winners of the 2014 Nobel prize for chemistry, in recognition of the potential impact the technology could have and the variety of strategies employed to image below the nominal diffraction limit.

STORM, a wide-field fluorescence microscopy process, uses a low-power activation laser to ensure that any particular photoswitchable fluorophore has only a finite chance of being photoactivated, while the bulk of the population remains unaffected.

Multiple applications of the fluorescence probe builds up a map of the active species' distribution, including ones spaced so closely together that they would fall within the same diffraction-limited volume and be unresolvable otherwise.

The ICFO project used a commercial Nikon N-STORM microscope to image specific core proteins in the chromatin structures, and achieved a localization precision of 9 nm. Quantifying an absolute image resolution is more difficult, since it is affected by factors like the labeling density; but resolution of around 20 to 30 nm was achieved, based on the smallest size of the nucleosome groups that were measured.

"It is very difficult to make direct comparisons and say one super-resolution method is better than another in general terms, but STORM's main advantage is the relative simplicity of the microscope," said Lakadamyali. "It belongs to the group of single-molecule-based super-resolution methods and uses stochastic switching of fluorophores, so the spatio-temporal resolution depends on the brightness and photoswitching properties of the fluorophore used."

Closer than ever
Sample preparation is a crucial part of a STORM experiment, and one hurdle for the team was to compare several different preparation methods to rule out any labeling-dependent artifacts.

Another challenge was to successfully count the nucleosomes. "Due to the stochasticity involved in STORM imaging, it is not easy to extract quantitative information from the images," Lakadamyali commented. "We made well-defined calibration samples and compared our data to these calibration standards, to be able to quantify the nucleosome numbers."

The ICFO/CRG team believes that it has come closer than ever before to visualizing the organization of nucleosomes; but the task is a complex one, and Lakadamyali regards the project's multi-disciplinary background as having been essential to success.

Super-resolution microscopy may now be the key to further refinements in the picture of nucleosome distribution, since alternative imaging modalities appear unlikely to prove as successful.

"The strength of super-resolution methods is the combination of structural information at high resolution with molecular specificity and high contrast," said Lakadamyali. "These methods fill the significant gap that exists between regular fluorescence- and electron-microscopy, so I believe they will have a big impact in the discovery of new structures in biology."