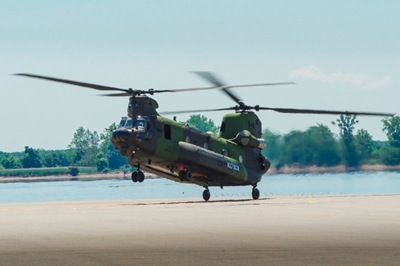 A new fleet of Chinook CH-147F helicopters flown by the Royal Canadian Air Force (RCAF) is to be fitted with the latest generation of laser countermeasures from defense giant Northrop Grumman.

Earlier generations of countermeasure systems have tended to be relatively bulky, and only suited to large, fixed-wing aircraft, but the development of smaller designs mean that helicopters and much smaller aircraft now use the technology.

For example, the most recent “Miysis” DIRCM technology developed by Selex ES features a multi-band laser and weighs only 16 kg. It is designed for smaller types of helicopter and is even said to be suitable for some unmanned drones.

In its Miysis literature, Finmeccanica-owned Selex ES, which is headquartered in Edinburgh, Scotland, writes:

“One of the greatest threats to airborne platforms is that posed by Infrared Man Portable Air Defence Systems (IR MANPADS). These readily available missiles are inexpensive, highly portable and have been used lethally during the last 40 years in both military conflicts and by terrorist organizations.

“MANPADS have become increasingly resistant to standard countermeasure such as decoy flares and, as such, the most effective defence from MANPADS is to directly attack them with a high-power, multi-band laser DIRCM system. Modern MANPADS can engage low-signature threats from any aspect, meaning that DIRCM systems must now provide all-aspect protection.”

Last year, Chinook maker Boeing said that it had completed delivery of the 15th and final CH-147F helicopter to the RCAF ahead of schedule. This particular version of the Chinook has been adapted with a new fuel system so that it can fly twice as far as normal, and cover the huge areas required by the Canadian authorities.

As well as its long-standing partnership with Selex ES, Northrop Grumman also has close ties with the California-based quantum cascade laser (QCL) technology specialist Daylight Solutions, having bought an equity stake in the company back in 2011.

The QCL-based approach is behind the development of common infrared countermeasures (CIRCM) systems that are even smaller and more versatile.

Other platforms in use include a range of options from Israel's Elbit Systems, some of which have been adopted recently by the German Air Force in its Airbus A400M military transport planes, and by an unspecified army in Asia to protect its Blackhawk helicopters.