optics.org gives a taste of some of the hundreds of announcements to come out during this week. 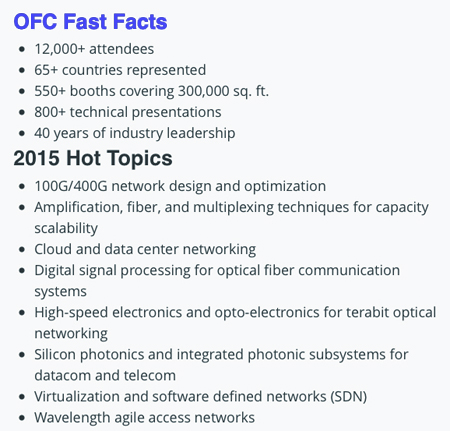 OFC 2015, the largest global conference and expo about optical communications, has been taking place this week in Los Angeles. The event attracts many of the the biggest names in the field, offering partnering opportunities, and providing insights on major industry trends and the latest technology.

Finisar has announced details of the company's technology roadmap for "next generation" multimode fiber interfaces. These include a new suite of products capable of links as long as 300m at 40Gb/s and 100Gb/s.

Multimode Fiber leverages VCSEL-based technology, which represents the lowest power, lowest cost and highest density interconnect technology available. MMF is the commonest optical interconnect between systems, and Finisar hopes its investment in this technology will help ensure that MMFcontinues to be the most cost-effective interconnect for all but the largest data centers. 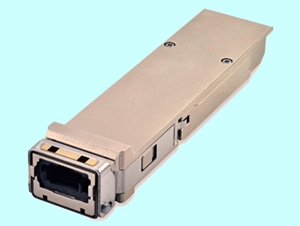 Research firm Gartner recently said that 94% of all datacenter sites built in 2014 were smaller than 250,000 square feet, and this percentage is not expected to change through 2018. A 300m optical link is sufficient for even the longest distances inside a 250,000 square foot datacenter.

M/A-COM Technology Solutions (Macom), a developer of high-performance analog RF, microwave and optical semiconductor products, announced that it will be collaborating with Kaiam Corp. to showcase an industry leading 400G demonstration at OFC. Macom is consolidating the high-speed semiconductor content in 100G/400G transceivers, optimizing its chips to enable highly-differentiated performance, power, size and cost benefits.

Ray Moroney, product manager at Macom, commented, “These ICs have the lowest power in their class, which is critical for a 400Gbs multi-channel solution. Kaiam’s module is compatible with a CDFP connector and provides 50% higher density per 100G than QSFP28. This joint development shows MACOM’s ability to support 400G applications.” 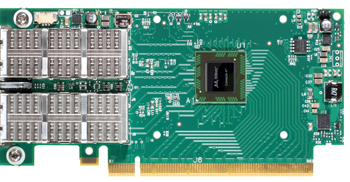 Mellanox also introduced its 100G VCSEL transceiver in the QSFP28 form factor with reaches of 100m over multi-mode fiber. New drivers and TIAs enable a low-power, low-cost solution for existing installations of OM3 or OM4 fiber. The transceiver consumes only 2.0W (maximum) with no retiming, and 2.8W (max) with full retiming.

Also demonstrated were Mellanox’s ConnectX-4 100Gb/s interconnect adapters which deliver up to 100Gb/s throughput, supporting both the InfiniBand and the Ethernet standard protocols. ConnectX-4 adapters provide the flexibility to connect any CPU architecture, whether x86, GPU, POWER, ARM or FPGA and others. 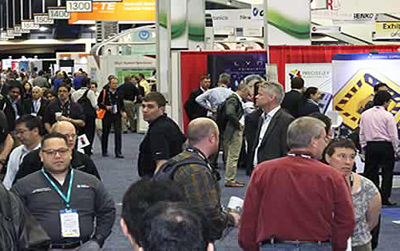 Saeid Aramideh, chief marketing and sales officer for Ranovus, commented, “Our OpenOptics MSA collaboration with industry leaders has resulted in the definition of a foundational WDM specification for data center network connectivity, and having terabit scalability on a single mode fiber pair infrastructure.”

“The availability of this specification is a major milestone for our industry which we believe will not only accelerate the adoption of silicon-photonics based WDM solutions for the data center market, but also allow for a scalable terabit infrastructure for next generation datacenter architectures. 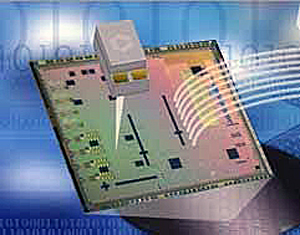 The requirement for cost-effective 100Gb Single Mode Optics has become crucial to building the next generation of datacenters. In particular, the major hyperscale Cloud datacenters are planning to adopt 100Gb at scale starting in 2015. Due to the large physical size of these datacenters, they require fiber optic links of up to 2km in significant volumes.

Greg Young, President and CEO of Luxtera, commented, “In 2015, hyperscale data centers are undergoing a tectonic shift as the industry moves to 100Gb, and single mode photonics replace copper to become the mainstream interconnect. Luxtera is at the forefront of this transition with the only optical transceiver technology that can deliver 100Gb speeds with up to 2km of reach at the aggressive cost points needed for these high volume deployments.”