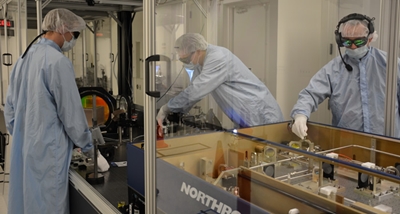 One of the key components of a future beamline destined for the Extreme Light Infrastructure (ELI) facility in Prague has been assembled – at the Lawrence Livermore National Laboratory (LLNL) in California.

LLNL is a key partner in the giant ELI project, and specifically with regard to the high-repetition-rate advanced petawatt laser system (HAPLS).

One of four high-energy laser beamlines set to be installed in Prague eventually, HAPLS is expected deliver a rapid stream of 30 femtosecond, 30 Joule pulses. That is equivalent to a power of one petawatt, and while other lasers can offer that kind of power, HAPLS will be able to produce such pulses at an unprecedented rate of 10 Hz.

Engineers from LLNL and the Northrop Grumman subsidiary Cutting Edge Optronics have just installed the main pump source for HAPLS. The injection-seeded, diode-pumped "GigaShot-HE" laser is capable of generating 2 Joule pulses with a duration of less than 10 ns at 532 nm. In the completed system, Ti:sapphire amplifiers will convert those pulses into the petawatt power regime.

Constantin Haefner, HAPLS program director at LLNL, explained that the beamline will be entirely diode-pumped, something critical to maintaining the rapid repetition rate for hours at a time. That approach should also ensure a high pulse-to-pulse stability and minimal maintenance compared with existing petawatt-class lasers.

The LLNL team had previously demonstrated the capability of diode-pumped technology on its “Mercury” high-energy nanosecond-pulse laser. It generated gigawatt-, rather than petawatt-scale peak powers, but could run at a high repetition rate for several hours at a time.

In HAPLS, five arrays comprising more than 500,000 laser diodes* in total – thought to be the largest number ever assembled - will be used to deliver a combined 3.2 MW of diode power prior to pulse compression and amplification. 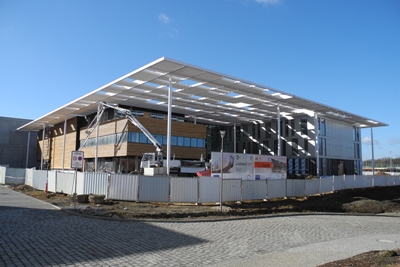 Under construction: ELI Beamlines in Prague

Under construction
At last year’s SPIE Photonics West exhibition, Haefner took part in the ceremonial signing of a contract between ELI Beamlines, LLNL, and the Austrian company Femtolasers. The Vienna University of Technology spin-out provided the ultrafast pulse seed oscillator for the 532 nm pump laser, with LLNL integrating it within a dual chirped-pulse amplifier system.

Haefner told optics.org at the time that the pump system was scheduled to ship from LLNL to ELI Beamlines in Prague in spring 2016, with “first light” of HAPLS pegged for 2018. Since that contract was signed, Femtolasers has been acquired by the US firm Newport, and is now part of the Spectra-Physics laser division.

ELI Beamlines is one of three high-power laser facilities at various stages of construction in eastern Europe. The Prague site is due to be completed first, before an attosecond pulse facility in Hungary, and an even higher intensity laser in Romania.

The fundamental point of HAPLS is to provide a user-friendly, "hands-off" source of such powerful laser pulses at the Prague site, something that should be of great benefit to those using the facility in the future. “HAPLS’s high repetition rate will make possible new scientific discoveries,” says Haefner.

Petawatt pulses are of such intensity that they generate secondary sources of radiation, like X-rays and high-energy electrons, and these can then be used to study fundamental behavior in physics, biology and materials science.

In addition to that, the high repetition rate will be of interest to those seeking to develop inertial confinement fusion (ICF) as a genuinely useful source of energy. Any ICF power plants of the future would rely on a rapid stream of ultra-high-energy laser pulses to be fired at a target that, when rapidly compressed, would release atomic power. LLNL is also home to the National Ignition Facility (NIF), which is working towards the ICF goal.

The pump source built at LLNL is not the only one destined for Prague. While it will form the “L-3” laser at the ELI Beamlines facility, last year a partnership led by National Energetics and featuring Lithuania’s Ekspla won a $40 million contract to build another of the beams - a 10 petawatt source that will pack 1.5 kilojoules of energy into each femtosecond-scale pulse.

* The laser diode arrays for this section of the HAPLS system are provided by Lasertel.