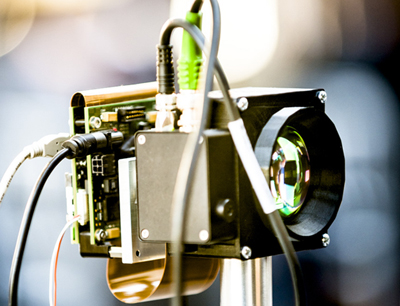 This week saw the opening of the QuantIC "quantum imaging" hub on the University of Glasgow campus, in Scotland. In attendance were partnership academics from at least six UK universities, alongside industrialists and many leading figures from the photonics community.

The hub brings together scientists from the universities of Glasgow, Bristol, Edinburgh, Heriot-Watt, Oxford and Strathclyde with experts from a range of industrial partners to commercialize new types of camera and imaging systems.

QuantIC is one of the four quantum development hubs, first announced in November 2014, which are sharing £270m in funding from the UK government over the next five years. It will be funded by a £27m award from the Engineering and Physical Sciences Research Council.

More than 30 industry partners are expected to support QuantIC to develop imaging systems to bring new benefits to the UK economy. At the launch ceremony, around 100 attendees from academic, industry and funding councils gathered to learn more about QuantIC’s potential and hear from speakers from organisations including the Scottish Funding Council. 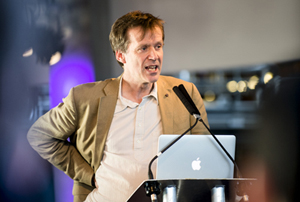 "The academic and industrial partners will be working together to pioneer a family of multidimensional cameras operating across a range of wavelengths, timescales and length-scales.

"Other R&D-focused groups involved with the QuantIC include our neighbor the Fraunhofer Centre for Applied Photonics and the UK government’s Defence Science & Technology Laboratory.”

Quantum photonics-related innovations that are already on the table for development include:

The launch saw a range of technology demonstrators already developed by members of the QuantIC partnership, including a camera which uses a cheap single-pixel sensor to create video images beyond the visible spectrum. This camera can be tuned to make it sensitive to infrared or ultraviolet light, making it capable of visualizing gas leaks, seeing clearly through smoke, or looking under skin for tumors.

The project, developed at the University of Glasgow in close collaboration with nearby M Squared Lasers, has the potential to create affordable handheld video cameras capable of seeing areas of the spectrum - only previously visible with larger and more expensive devices. 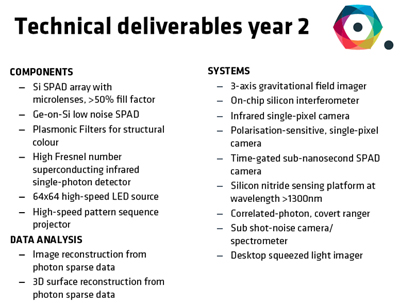 Also on display was a new camera, developed by researchers at Heriot-Watt University, which uses highly advanced photon-timing techniques to see through layers of organic tissue, and a detector designed to image minute changes in gravity fields.

Padgett added, “It’s our emphasis on industrial engagement that marks us out as different. The hub’s opportunities panel, which determines which projects will proceed, is mainly industry people and the only academics are director Steve Beaumont and myself. I’m hoping that this will mean a much clearer path between discovery science at universities and the pre-commercial development of new prototypes that partner companies can present at trade shows and conferences.”

Presentations at the launch detailed two-year and five-year R&D objectives for QuantIC. By mid-2017, the center is expected to develop a range of components, data analysis and systems including a silicon SPAD array with microlenses with a >50% fill factor, a capability for image reconstruction from photon-sparse data and a 3-axis gravitational imager. 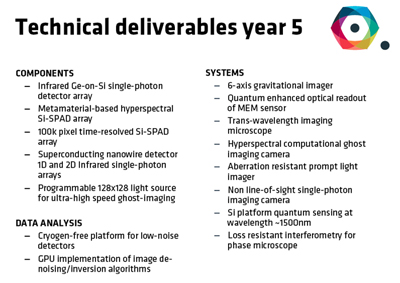 And by 2020, QuantIC and its partners should have delivered an germanium-on-silicon single infrared photon detector array, a cryogenic-free platform for low-noise detectors and a 6-axis gravitational imager.

Of the near future and beyond the planned funding period, Padgett commented, “All of the hubs will be reviewed at two years to consider successes such as quick wins, and whether there is industrial or commercial endorsement of the developments.

"From a government point of view, they have said that if we make a good job of it then after five years it won’t necessarily be the end of the story for us. Hub 2.0, Catapult or some other sort of innovation center are all possibilities,” he added, optimistically.