Expected to have significant applications for energy research and environmental safety. 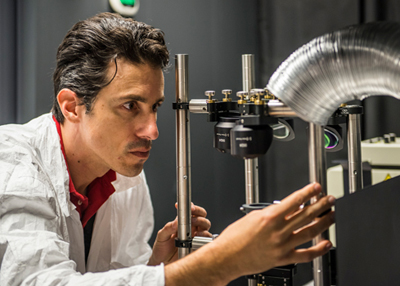 A nano-optical chip that makes possible the generation and control of nanoscale “rogue waves”, has been developed by an international team of physicists, led by Andrea Fratalocchi from King Abdullah University of Science and Technology (KAUST), Saudi Arabia. The photonic chip is expected to have significant applications for energy research and environmental safety. The work is described in Nature Physics.

To reveal the mechanisms driving such high-energy phenomena, Fratalocchi, who is assistant professor in the Computer, Electrical & Mathematical Science and Engineering division of KAUST, led a team of researchers from Saudi Arabia and three European universities to investigate the dynamics of such destructive events and model and control their formation in a new design of optical chips, which, he says, could open various technological applications.

"I have always been fascinated by the unpredictability of nature," Fratalocchi commented. "And I believe that understanding this complexity is the next frontier that will open cutting edge pathways in science and offer novel applications in a variety of areas."

The team began their research by developing new theoretical ideas to explain the formation of rare energetic natural events such as rogue waves — large surface waves that develop spontaneously in deep water and represent potential risks for vessels and open-ocean oil platforms. Fratalocchi continued, "Our idea was something never tested before. We wanted to demonstrate that small perturbations of a chaotic sea of interacting waves could, contrary to intuition, control the formation of rare events of exceptional amplitude."

A planar photonic crystal chip, fabricated at the University of St. Andrews and tested at the FOM institute AMOLF in the Amsterdam Science Park, was used to generate ultrafast (163fs) and sub-wavelength (203nm wide) nanoscale rogue waves, proving that Fratalocchi's theory was correct. The newly-developed photonic chip offered an exceptional level of controllability over these rare events. 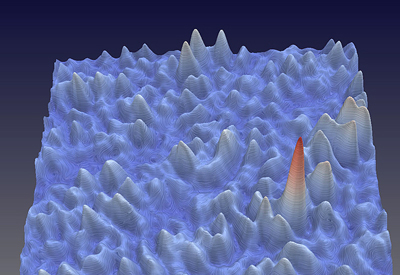 Experimental image of a nanoscaled and ultrafast optical rogue wave.

Thomas Krauss, head of the Photonics Group and Nanocentre Cleanroom at the University of York, UK, was involved in the development of the experiment and the analysis of the data.

He said, "By realizing a sea of interacting waves on a photonic chip, we have been able to study the formation of rare high energy events in a controlled environment. We noted that these events only happened when some sets of waves were missing, which is one of the key insights our study."

Kobus Kuipers, head of nanophotonics at FOM institute AMOLF, NL, who was involved in the experimental visualization of the rogue waves, was fascinated by their dynamics: "We have developed a microscope that allows us to visualize optical behavior at the nanoscale. Unlike conventional wave behavior, it was remarkable to see the rogue waves suddenly appear, seemingly out of nowhere, and then disappear again as if they had never been there."

Andrea Di Falco, leader of the Synthetic Optics group leader Di Falsco said, "The advantage of using light confined in an optical chip is that we can control how the energy in a chaotic system is dissipated, giving rise to these rare and extreme events.

“It is as if we were able to produce a determined amount of waves of unusual height in a small lake, just by accurately landscaping its coasts and controlling the size and number of its emissaries. The outcomes of this project offer leading edge technological applications in energy research, high speed communication and in disaster preparedness."

Fratalocchi and the team believe their research represents a major milestone for KAUST and for the field. "This discovery can change once and for all the way we look at catastrophic events," concludes Fratalocchi, "opening new perspectives in preventing their destructive appearance on large scales, or using their unique power for ideating new applications at the nanoscale."