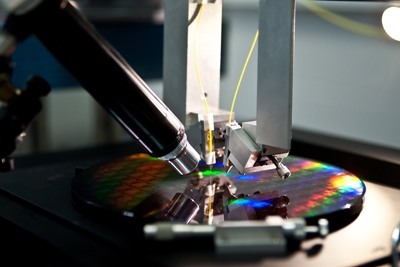 A collaboration of scientists from Europe and New Zealand have used a silicon waveguide to extend the range of a frequency comb deep into the infrared spectrum – suggesting that the approach could lead to future chip-scale molecular detectors operating across the mid-IR “fingerprint” region.

The research team, which includes Ted Hänsch – co-winner of the 2005 physics Nobel for his early work on frequency combs – has so far demonstrated octave-spanning operation from around 1500 nm to 3300 nm.

But in a paper that they have just published in the journal Nature Communications, they say that by altering the design of the silicon nanowire waveguide they could extend the wavelength range to 8500 nm.

That would open up the possibility of building cheap and compact high-resolution spectroscopic sensors operating across virtually the entire mid-IR range, and theoretically able to detect almost any molecular substance.

In the paper, Hänsch and his collaborators write: “By using waveguide designs where the buried oxide is removed, the entire silicon transparency window (up to 8,500 nm) could be covered.”

And although the current experiment relies on a bulky light source – an optical parametric oscillator (OPO) pumped by a Ti:sapphire laser – in the future that could be replaced with quantum cascade lasers or microresonators in a far more compact design. Thulium-doped fiber laser offer another way to generate the required supercontinuum source.

“Our work would then represent an essential building block paving the road for an octave-spanning frequency comb entirely generated on a chip,” the team suggests.

ERC grant funding
As well as Hänsch and his colleagues at the Max-Planck Institute for Quantum Optics in Garching, near Munich in Germany, the team includes collaborators at IMEC and Ghent University in Belgium, CNRS in France, and the University of Auckland in New Zealand.

They have been working together thanks to grants from the European Research Council for three related projects, called “Multicomb”, “Miracle”, and “InSpectra”.

Of those, the five-year “Miracle” and “InSpectra” efforts, both co-ordinated by Ghent’s photonics research group, run until December this year, while the Hänsch-led “Multicomb” is funded through August 2016.

According to IMEC, one of the critical parts of the latest work was to fabricate a nanowire silicon waveguide that confines the pump light from the OPO into a tiny space. Strong light-matter interaction in the silicon waveguide, plus the material’s broad infrared transparency, produce the octave-spanning comb.

The key element – a 10 mm-long air-clad photonic wire - was made on a CMOS pilot line on a silicon-on-insulator wafer, with the device built on top of a buried oxide layer.

“The results are an important step towards a small-footprint chip scale mid-infrared frequency comb source,” reckons IMEC. “Such sources could act as sensitive cheap gas sensors in the mid-infrared. These would be important for example for environmental monitoring for measuring air pollution, or in medical diagnostics as a cheap tool for breath analysis.”