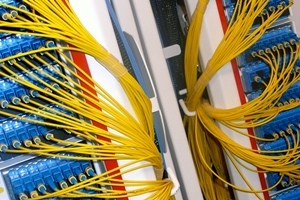 CEO John Croteau told an investor conference call to discuss the firm’s latest financial quarter: “After the announcement of our agreement to acquire BinOptics, it became clear literally overnight that the strategic upside of the transaction would exceed our expectations.”

M/A-COM closed the deal on December 15, and Croteau said that since then discussions with existing major customers had revealed potential for expanded relationships and cross-selling activity.

The CEO cautioned that challenges remain as BinOptics transitions from a rapidly growing small company to a larger manufacturing operation under M/A-COM’s control, but it is clear that there is already very strong demand for the company’s devices.

“We expect revenue growth for this new laser business to remain supply-limited through the remainder of fiscal 2015,” Croteau added. M/A-COM’s current fiscal year runs until the end of September 2015, and when the BinOptics acquisition was originally announced the company said that it planned to quadruple its laser manufacturing capacity within a year.

It added at the time: “In the last two years a gap has been created in the merchant supply of photonic chips, especially lasers. We are well positioned to fill this gap with BinOptics.”

Hinting at the potential size and rapid growth of that market, Croteau said that a major Chinese OEM expected demand for the devices in access applications to rise by two orders of magnitude. “BinOptics is shaping up to be a goldmine,” he told investors.

Public offering set to raise $140M
Documents filed with the US Securities & Exchange Commission (SEC) show that the acquisition cost M/A-COM $224.1 million, slightly less than the $230 million originally mooted. They also reveal that BinOptics posted sales of $38.7 million in the first nine months of 2014 - equivalent to an annual run-rate of around $50 million.

That compares with full-year sales of $19.3 million in 2013, illustrating the rapid rate of growth that M/A-COM had found attractive. The BinOptics operation also looks highly profitable, delivering a net income of just over $22.1 million in the first nine months of 2014.

M/A-COM part-financed the BinOptics acquisition by borrowing an extra $100 million under an existing long-term credit facility, and it is now looking to boost its bank balances with a public offering of stock.

According to a prospectus filed with the US Securities & Exchange Commission (SEC), up to 4.5 million shares in M/A-COM will be sold by the firm, along with another 2 million by its majority stockholder and chairman John Ocampo.

With the company’s stock currently trading at long-term highs in excess of $32 on the Nasdaq exchange, that could net the company in the region of $140 million as it sets about ramping the BinOptics capacity.

Increasing R&D commitment
As of January 2, M/A-COM’s balance sheet showed $48.4 million in cash and equivalent assets, down from $173.9 million before the BinOptics deal was completed. The balance sheet also shows long-term debts amounting to $443 million.

In the latest quarter M/A-COM, which mostly sells radio frequency components used in wireless communication and radar applications, said that it had made a net loss of $6.3 million on total sales of $114.9 million.

CEO Croteau noted that, in contrast to a general softness across many of its markets, its optical component business, focused on 100G communications, grew 35 per cent sequentially. That figure excluded around a $2 million contribution from BinOptics in the final fortnight of 2014.

He added that BinOptics founder Alex Behfar, said to have built up a formidable portfolio of intellectual property protecting the etched-facet lithographic process used to make the lasers, would be staying on “hopefully in perpetuity” following the change in ownership.

"We are increasing the commitment to R&D to be able to distance [BinOptics'] IP position [and] support the economics as they move into data centers," Croteau told investors.