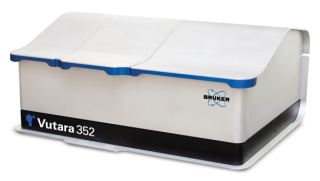 Unveiled at the American Society for Cell Biology's 2015 annual meeting, the Vutara 352 is being marketed by the company as the "world’s only quantitative super-resolution microscope," said to deliver the fastest super-resolution single-molecule localization (SML) microscopy commercially available.

According to Bruker, it supports up to five laser sources, and can deliver XY resolution of 20 nm along with Z resolution of 50 nm. The system is intended to combine high 3D-resolution with video-rate nanoscopy, allowing it to identify, track, and quantify fluorescent clusters in live-cells.

"Single-molecule localization techniques are unique, in that the images are constructed from discrete, molecular-scale events," commented Stephen Minne of Bruker's Fluorescence Microscopy business. "Unlike any other super-resolution system, the Vutara 352's new proprietary algorithms leverage this benefit, enabling researchers to conduct immediate quantitative analysis on their biology."

The company's approach to 3D imaging exploits its proprietary "biplane imaging" technology, which is used to convert two-dimensional super-resolution images into 3D information.

In the Vutara 352, the biplane technique is used alongside Bruker's "quadfield" computational software, a combination which can detect the fluorescence point spread function from two different focal planes. According to the company, summing the total number of photons in this way produces an improved localization precision over a larger axial range, and does so without losing photons.

Correlative imaging
The new system is intended to be compatible with Bruker's Opterra SR confocal scanner, used for imaging of fixed or live-cell samples. This approach allows correlative imaging - the practice of imaging across a range of modalities to maximize the information being gathered, including both confocal and super-resolution methods.

"Fast deconvolution of confocal images provides us with a much clearer picture of samples of interest at high resolution to complement our super-resolution imaging," said Robert Hobson of the University of Utah. "The addition of the quantitative analysis tools allows us to ask more detailed empirical questions and obtain more rigorous results."

Vutara was originally a University of Utah spin-out, founded in 2009, whose work on 3D super-resolution fluorescence microscopy led to it being acquired by Bruker in July 2014 for an undisclosed sum.

At that time Bruker commented that Vutara's super-resolution expertise would be a good fit with Bruker's existing multi-photon and multi-point scanning optical microscopy technologies, and the release of the Vutara 352 is part of that synergy.

• Single-molecule localization methods have played a large part in the recent momentum behind super-resolution microscopy, which included some of the original developers sharing the 2014 Nobel chemistry prize for their work. The technique aims to image below the nominal diffraction limit by only photo-activating a small number of the target chemical fluorophores at a time, before deactivating them and moving on to others. Repeating the operation multiple times activates all available fluorophores individually, even if they are too close together to be resolved by conventional microscopy.