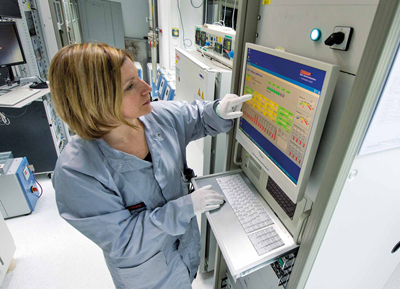 Robustness tests are carried out in Osram's Reliability Lab.

For many years, leading manufacturers of televisions have been demanding an ever broader color space from the sources available. Besides offering this extension, Osram-OS's newly-developed technology contains no cadmium, which is becoming a problem in certain other color screen conversion technologies.

As Ultra HD TV, which was launched in 2012, takes off in the global markets, the TV screen presentation standard has once again moved to a larger color triangle. Osram-OS’s Quantum Colours was developed for precisely this standard, says the company. Initial customer projects are already in progress, and the technology is scheduled to be deployed in backlighting LEDs for the mass market by the end of 2016.

Quantum Colours is based on a green quantum converter which is combined with red phosphor on a blue chip. The technology was developed in part in the SSL4EU and Hi-Q-LED projects funded by the EU and the German Ministry of Education and Research but - significantly - it does not require any cadmium.

This results in numerous advantages over quantum dot sheets which have been used up to now to achieve high-quality color rendering in TV backlighting. “Quantum Colours offers superior coverage of the colour space due to a narrow green peak with a full width at half maximum of only 30nm,” stated the company.

Colour space standards such as DCI can be covered 100% and REC2020 more than 80%. The Osram technology does not require the system or any other components to be adapted, which means a more simplified production process and a less complex entire system in the finished products. 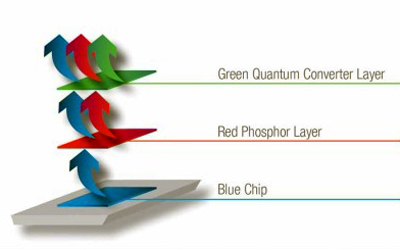 Peter Lenz, Product Marketing LED at Osram Opto Semiconductors, commented, “Compared with quantum dot sheet solutions, which are based on semiconductor particles measuring only a few nanometers, costs can be halved. I can give you a specific example of how much customers can save.”

“For a 55-inch Ultra HD TV with 100% DCI coverage, the complete cost of the light source can be as low as €55, based on our Quantum Colors technology,” he said. “The cost of just the quantum dot sheets in existing solutions is twice as much.” [the source of quantum dot sheet costs for these comments is: “The Price of QD Material is Falling, But Not Enough” – DisplaySearch, February, 2015).

Another advantage of the new display technology is the constant color prentation throughout the life of the LED. Osram-OS says that “quantum dot sheets take on a bluish tinge over time. As far as lifetime is concerned, Quantum Colours LEDs should last at least 30,000 hours; initial tests have produced positive results.”

The company is currently in the progress of transferring this technology into actual product development projects. First samples are already available and engagements with key customers have already started. Osram told optics.org that it expects this new LED technology will be commercialised by the end of 2016.