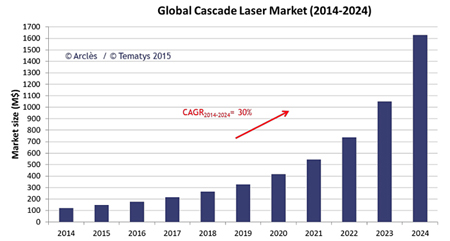 On the up: According to Tematys, the CL technology is "mature and already a business".

The market for cascade laser (CL) systems is expected to grow from $148 million in 2015 up to $1.7 billion by 2024 with the strong CAGR increase due to the maturation of commercial products using CL components. These are some of the key conclusions of a new report produced by Paris-based market analyst Tematys.

The €3490 report provides an overview of CL-based systems both on the market and under development, including the CL source, the driver and the beam transport accessories. It defines and analyzes the different business segments of the market and examines the main challenges to be addressed both on the technology and the application sides in the short, mid and long-term. It also identifies the CL main industries and R&D players worldwide.

The first CL-based systems for applications outside research labs were sold in the early 2000s. CL-based systems for spectroscopy or imaging are still relatively expensive – typically costing at least $50,000 to $100,000, compared to existing technologies like UV and NIR. Despite this, Tematys estimates that around 4000-5000 CL sources have been sold yearly in the past two years through 2015.

Considering the hot markets for CL systems, multigas detection for industrial applications is expected to continue to be the biggest market for the coming five years. 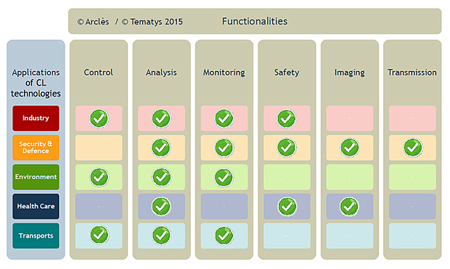 However, transport and healthcare applications should take off and become the biggest market sectors in the longer term, ultimately representing more than 50% of the total business.

In healthcare, CL sources are a key component for certain point-of-care devices. In transport, the three main applications are forecast to be: exhaust analysis for engine design and certification; vehicle emissions monitoring; and jet fuel control.

The latest report provides extensive market data with detailed dollar values across the decade 2014 to 2024 for applications including industry, security and defense, environment, healthcare, and transport.

CL technology is ‘mature and already a business’

Tematys believes the CL market is a “young market", noting that CL-based systems were first sold in the early 2000’s, and commenting that "the mid-infrared spectrum is being adopted by users more and more today because it enlarges the capabilities of spectroscopy."

With its narrow linewidth and good wavelength tunability, CL technolog is suitable for applications such as industrial sensing; explosives or chemical detection; or in light sources for IR imaging systems, medical diagnostic and spectroscopic applications.

Authors Eric Margoto and Yves Fazilleau, both senior analysts at research group Arclès, which produced the report, commented, “The need for high performance detection in many fields is a great opportunity and driver for the implementation of cascade laser technology."

Today, the market segments industry, environment and transport are the most mature and the biggest ones, while military applications represent by far the biggest part of the security and defence application market. 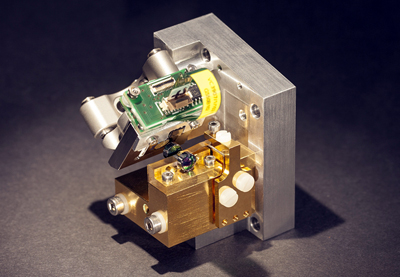 The MIR spectrum enlarges the adoption of spectroscopy along with NIR and UV-VIS and CL sources are becoming a new competing technology for spectroscopy, imaging and transmission applications. The report provides a study of CL components, systems and application markets. It evaluates the potential and the challenges to be faced in more than 25 market segments. It also provides an application roadmap for the next decade.