The electronics giant, which along with Samsung dominates the market for OLED displays and for OLED televisions in particular, said it would invest an initial KRW1.84 trillion to begin construction of the “P10” plant. A mass production ramp is expected to begin in the first half of 2018.

“The P10 plant will mainly produce both large-size OLED TV panels and flexible OLED panels for smartwatches and automotive displays,” announced the firm. Its initial investment covers the construction of the P10 building – which will cover the same area as 14 football fields – as well as clean room foundations and essential services infrastructure.

“Plans call mostly for the installation of large-size OLED lines that will be 9th generation or above, along with flexible OLED lines at the new plant,” added LG Display.

The company says it is expecting that those production lines will make OLED for every product segment, including ultra-large-size screens as well as flexible and transparent displays.

LG Display’s CEO Sang Beom Han (pictured) added: “LG Display’s investment in [the] P10 plant is a historic investment for the industry since it will not only help expand the OLED market but also accelerate the development of future display technologies. With the active support of the Korean government, we believe the P10 plant will become the center of the global OLED industry.” 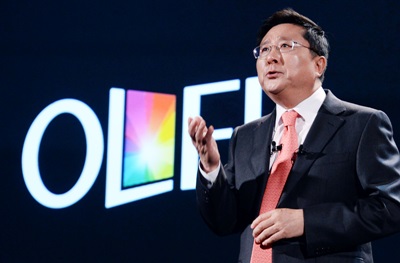 Flexible, vivid form
Earlier this year at the IFA 2015 trade show in Berlin, Germany, Han said in a keynote address that OLED is the only technology able to overcome the limitations of conventional displays, by offering “enhanced reality combined with dynamic form”.

Those comments refer to the more vivid color reproduction and true blacks that are made possible by the OLED’s use of self-emitting light sources – in contrast to the use of white backlights in LCD screens – as well as the inherent flexibility of the technology.

Ching W. Tang, a professor at both the University of Rochester and the Hong Kong University of Science and Technology and regarded as one of the key pioneers of the technology, said in a release from LG Display:

“Without backlight and other auxiliary layers, the OLED display is fundamentally less complicated compared to LCD, and in time less costly to manufacture. I have no doubt, given its advanced features and superior performance – foldable, wearable, flexible and transparent, OLED is the display technology for the next generation.”

At present, only LG Display is making TV-sized OLED displays in serious volumes – and they are still very much targeted at the high end of the consumer market. In recent years, LCD TVs enhanced by quantum dot (QD) technology have emerged as a cheaper way to achieve more vivid color reproduction with white backlights.

Market expectations
Market forecasters appear somewhat divided on the prospects for OLED in large formats. Analysts at Lux Research said recently that although the market for OLED displays will grow to around $15 billion by 2020, QD-LCDs would prove much more popular in TVs.

Meanwhile IHS forecasts that the global market for OLED panels will grow to $29.1 billion by 2022. LG Display says that TV manufacturers in Korea, China and Japan have already launched OLED TV models, and they expect more TV manufacturers in Japan and Europe to adopt OLED TVs in the near future.

That is despite Samsung’s withdrawal from the OLED TV market – even though the company pioneered the development of the form and, alongside LG Display, launched the first OLED TV products.

LG says that demand for flexible OLED panels for devices like smart watches and automotive displays is also rising, while speculation has been building that Apple is set to adopt the technology for its iPhones at some point in the future. At present there is insufficient OLED capacity to meet Apple’s needs, and that this will remain the case until 2017 at the earliest.

LG Display’s investment in both the P10 plant and another facility for “6th generation” OLED panels, flexible OLED panels and premium LCDs in Gumi, Korea, may position it as a potential supplier. The company expects the Gumi production line to make 7500 sheets per month, with mass production slated for the first half of 2017.