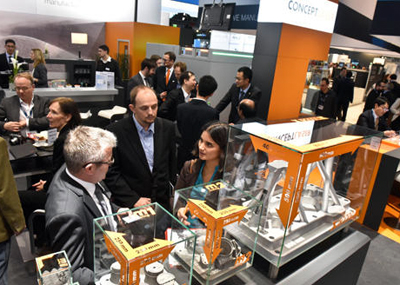 Formnext, the international exhibition and conference on additive technologies and tool making, which ran last week in Frankfurt, Germany, gave several developers of laser additive manufacturing systems a good opportunity to showcase their latest innovations in this rapidly-expanding industrial sector.

Concept Laser presented a new machine and plant architecture. A modular, integrated machine concept called AM Factory of Tomorrow offers modular integration of this machine technology to the manufacturing environment, with what the company calls “a radically new approach in the design of process components”. After its debut at Formnext, Concept Laser will launch it into the market by the end of 2016.

Dr Florian Bechmann, Head of R&D at Concept Laser, explained “Factory of Tomorrow is about splitting up a build job’s preparation, follow-up processing and additive manufacturing in any number of combinable modules. With comparatively large build envelopes, jobs can be carried out with a time delay. Our intention is that this should drastically reduce the downtime associated with previous stand-alone machines. There is plenty of potential here for improving the level of added value in the production chain.”

Bechmann said, “AM users experience the pressure of traditional manufacturing: demand for space, expansion of the machinery, increasing operating tasks and in particular times. In the new approach from Concept Laser, interesting solutions are offered in this regard: production is decoupled in machine terms from the preparation processes. The time window for AM production is therefore increased to a 24/7 level, meaning that there is higher availability of all components.” 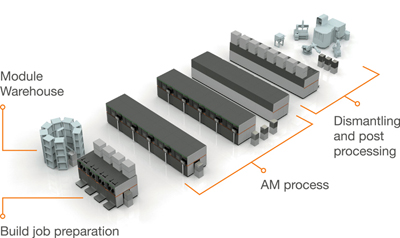 Concept's concept: the modular "AM Factory of Tomorrow".

Modular scenarioConcept Laser argues that by adopting its AM Factory of Tomorrow approach the requirement for build space can be reduced by up to 85% compared to current models. In addition, the laser power per square meter may be increased seven-fold. “Build rates have increased enormously thanks to the multilaser technology,” said Bechmann. “Build envelope sizes have also experienced considerable growth. We now want to use an integrated machine concept to highlight the possible ways that the approaches of Industry 4.0 can change additive manufacturing as the manufacturing strategy of the future.”

In an example presented by Concept Laser at Formnext, the laser processing station offers a build envelope of 400 x 400 x >400 mm3, laser sources, process gas management and filter technology are integrated in the module. This machine solution has a variable focus diameter and will be available optionally with 1, 2 or 4 laser optics with a laser power ranging from 400W to 1kW. Bechmann said, “More and more laser sources only increase the expected speeds to a limited extent. But ultimately they also increase the level of complexity and dependencies, which can result in vulnerability, and thus turn the desired positive effect into a negative.”

Additive manufacturing specialist EOS also used the Formnext expo to demonstrate a new approach and new equipment. The German-headquartered company believes a central concern of this expanding industrial sector is to establish a holistic approach to quality assurance in series production. 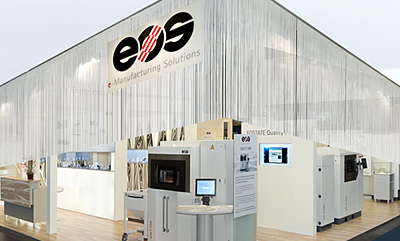 EOS at Formnext: It has "doubled its installed base over the past three years".

Dr. Tobias Abeln, Chief Technical Officer at EOS, stated, “Consistent and repeatable part quality is essential for series production applications. With our quality assurance concept, EOS covers the three technological elements of additive manufacturing, which have a direct influence on the quality of an additively manufactured component – namely system, material and process. Thanks to the joint development and mutual adjustment of systems, materials and processes, EOS has established the conditions for best possible part properties.”

At Formnext, EOS was showcasing its solutions with the theme “Shaping the future of manufacturing”. As well as presenting its established portfolio of systems, qualified materials, processes and services, the company introduced a new metal system, a new monitoring solution, and new work material. The EOS M 100 is a compact system that provides a cost-effective entry into Direct Metal Laser Sintering, said the company.

Dr. Adrian Keppler, Chief Marketing Officer at EOS, said, “Our company has been pursuing an unparalleled course of growth and success for several years. By October 2015, there were approximately 2,000 EOS systems installed around the world. We were able to double our installed base over the last three years; during the last two years, the number of metal laser sintering systems was doubled from 400 to 800 systems. 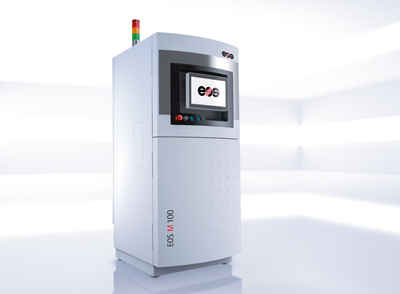 During the past business year alone, the company sold 400 systems, including 220 metal systems. This underlines EOS' leadership role particularly in the metal segment, and the growing interest in this technology particularly in the series production segment. We expect that market demand will continue to rise in the future - not least because leading companies worldwide trust in our technology."

Also during 2015, EOS has increased sales revenues by 53 percent over 2014, to €263 million. All regions exceeded its targets, especially North America delivered a record result with more than $100 million in sales revenues. Today, EOS has 750 employees worldwide, which represents an increase of 38 percent in its global workforce compared to the previous year.

The company says its growth is reflected in the fact that individual locations are also experiencing steady growth. At its Krailling headquarters, EOS recently started the construction of another building, since the technology and customer centre, which started up just last year, is already reaching the limits of its capacities.