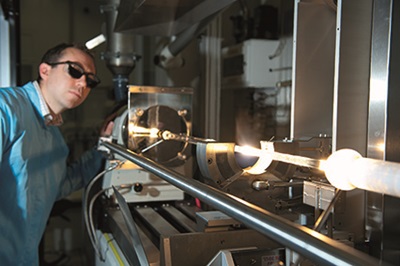 Southampton’s Optoelectronics Research Center (ORC) is to lead a new UK photonics technology commercialization “hub” that has attracted more than £25 million in funding.

The Engineering and Physical Sciences Research Council (EPSRC) has allocated £10 million towards the national project, with an additional £12.5 million pledged by the private sector. More than 40 companies are already said to be involved, with collaborative projects slated to start in January 2016.

Together with the ESPRC National III-V Centre at the University of Sheffield, a key partner in the “Future Photonics Hub” with expertise in the epitaxial deposition processes used to make active optoelectronic devices, ORC is contributing another £3 million.

ORC chief Sir David Payne is heading up the new hub as director, with Sheffield’s Jon Heffernan and ORC’s Gilberto Brambilla as deputies. Payne said: “We know from experience the astonishing range of innovative ideas that emerge when scientists and engineers think about manufacturing. The key is to work with industry to understand the opportunity not only to improve existing manufacturing methods but to develop entirely new ways of making things.” 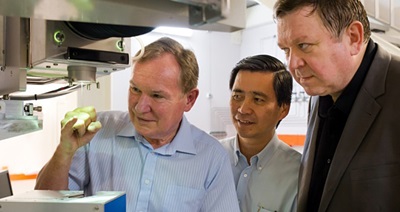 Target markets
Officially known as the EPSRC “National Hub in High Value Photonic Manufacturing”, it is hoped that the new center will accelerate the growth of the UK’s photonics industry, currently estimated at £10 billion annually.

“The primary economic impact of the hub will be to aid rapid commercialization of emerging technologies,” said the ORC. “This will result in new products and services in both the photonics industry and in the industries enabled by photonics.”

While ORC is best known for its research into optical fiber and its application in communications networks, the target markets for the new center also include defense and security, space, semiconductor manufacturing, and healthcare.

Partner companies already listed by EPSRC as being involved in the hub include familiar names such as Coherent UK, Renishaw, and the ORC spin-out Fianium, as well as the likes of BAE Systems, the Atomic Weapons Establishment (AWE), and Land Instruments International, part of the Ametek group of companies.

For silica fibers, Lincoln says that the key technical challenges are to improve loss, gain and power handling, while broadening the transmission window. “Solutions will be developed to meet the needs of industry, which relies on optical fiber as an essential component in many photonics devices and systems,” he added.

The “light generation and delivery” element will aim to develop new manufacturing processes to make devices and systems extending into the infrared region, while the key deliverables for the silicon photonics platform include developing ultra-low-cost transceivers for data centers, as well as mid-infrared sensors.

For metamaterials and two-dimensional materials (e.g. graphene), by far the least commercialized of the target areas at this point, the hub will look to develop new processes for large-scale manufacturing of the novel materials.

“Enabling the practical exploitation of their new electromagnetic properties by industry will open up the design space for new photonic devices across a range of applications including telecommunications, displays and sensors,” says the team. 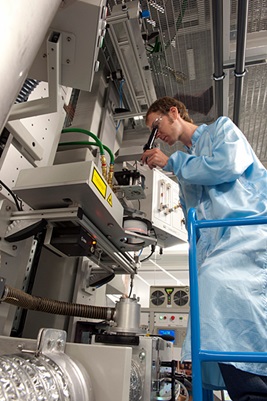 Hubs and networks
Jo Johnson, the UK’s minister for universities and science, said of the £10 million investment in both the photonics hub and another dedicated to liquid metal engineering at Brunel University near London’s Heathrow Airport:

“With this investment, these new manufacturing hubs will develop the next generation of high-tech products in communications and healthcare, as well as tackle industry challenges such as rising materials costs.”

The establishment of a dedicated center for integrated photonics technology development in the UK comes a few months after the US selected the upstate New York region as the lead partner for its similar AIM Photonics project.

Meanwhile the UK has also set up a quantum technology network comprising four dedicated hubs with commercial and academic partners across the country - all four of those centers rely heavily on photonics technologies.

In addition to the new photonics commercialization hub, the past couple of years has seen Southampton open its Zepler Institute, a multidisciplinary research center building on its photonics expertise, and The Photonics Institute - a collaborative effort with Nanyang Technological University in Singapore.