PLAT4M project focused on “speeding industrialization” of this technology. 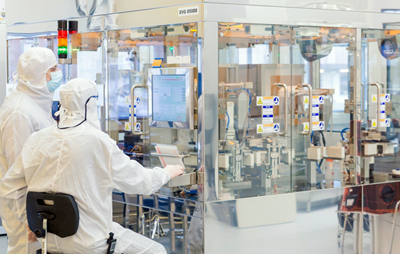 Research hub: one of Leti's cleanrooms in Grenoble.

French technical research organization CEA-Leti, based in Grenoble, and its partners in the European FP7 project PLAT4M have announced the successful development of three silicon photonics platforms. The four-year project, which launched in 2013, is aiming to build a European-based supply chain in silicon photonics and speeding industrialization of the technology.

PLAT4M, which is funded by a European Commission grant of €10.2 million, involves 15 leading European R&D institutes and CMOS companies, as well as key industrial and research organizations in design and packaging, and end users in different application fields, working to build the complete supply chain. The supply chain is based on technology platforms of Leti, imec and STMicroelectronics.

Imec said its silicon photonics platform, based on 200mm substrates, “has matured thanks to the PLAT4M project”. This platform is based on SOI substrates with 220nm crystalline silicon on a 2,000nm buried oxide. During this project the existing fabrication processes and integration flow have been fine-tuned to have stable and repeatable performance for all photonics building blocks (couplers, waveguides, phase shifters, photodetectors). PLAT4M partners Thales, Polytec and TNO already are using the technology.

Leti itself has developed a new photonic platform based on 200mm SOI wafers. This process offers multilevel silicon patterning that allows the design of various passive and active devices (such as modulator and photodiode) with thermal tuning capability. Two AlCu levels are available for routing. A process design kit is available for circuit design and an MPW service will be proposed in 2016.

The potential of the new platform has also been demonstrated: insertion losses are below 2dB/cm for monomode waveguide and below 0.2dB/cm for multimode devices. Germanium photodiode responsivity is >0.75A/W for a bandwidth >30GHz. Mach-Zehnder modulator V•L• is in the 2V.cm range for 2V operation with an E/O bandwidth > 25GHz.

Moreover, Leti and III-V Lab have together developed integrated hybrid III-V lasers and electro-absorption modulators on silicon using a wafer-bonding technique. The hybrid lasers operate in the single-mode regime and the EAMs exhibit an extinction ratio higher than 20 dB with a drive voltage lower than 2V. Clear eye diagram has been achieved at a bit-rate of 25 Gb/s, confirming strong potential for telecom applications.

Schematic of the CBC experiment layout with the PIC.

At the halfway stage of the project, the CEA LETI team has reported that the PLAT4M WP2 work “has led to a qualitative leap of the design flow for silicon photonics, allowing the photonics community to design more complex and more robust circuits. The electronics OpenAccess standard for data sharing between design-automation tools includes an extension for silicon photonics in a beta phase today. Simulation capabilities were leveraged thanks to an extensive characterization effort from the three partner fabs and thanks to the statistical data gathered for variability prediction.”

Besides this, Paris-Sud University has studied theoretically the behavior of different phase shifters and photodetectors for a time-efficient and precise modeling. Mentor Graphics and PhoeniX Software partners have improved phase-aware routing and tool interoperability. Verification and manufacturability have reached industry-requirement standards thanks to the development of new techniques based upon the Mentor Graphics Calibre platform that delivers layout-versus-schematic comparison. Mask preparation is also improving with better pattern-density control and mask correction.