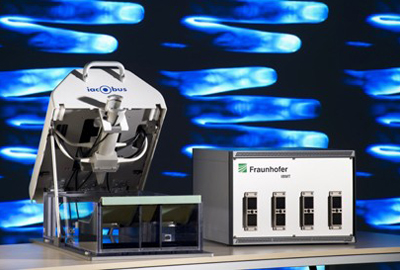 Scientists working on the EC-funded project IACOBUS, led by the Fraunhofer Institute for Biomedical Engineering (IBMT), Frankfurt, Germany, are developing an optical finger scanner which will allow arthritis of the hands to be diagnosed at an early stage. The team will be presenting a prototype of the new technology at the MEDICA expo in Düsseldorf from November 16 - 19.

Early detection of arthritis requires suitable imaging techniques; conventional X-ray imaging will only detect typical features of arthritis at a fairly advanced stage. By contrast, use of Doppler ultrasound is more likely to detect arthritis at an earlier stage by visualizing changes in local blood flow. Magnetic resonance imaging (MRI) can detect arthritic changes of cartilage and bone earlier than X-ray but is significantly more expensive than X-ray and Doppler ultrasound.

The three-year IACOBUS project, due to finish at the end of December 2015, is a European consortium composed of several research institutions and companies led by the Fraunhofer IBMT has developed an alternative diagnostic technique combining ultrasound technology with novel optical detection methods. This involves the use of a 3-D finger scanner that searches joints for sites of inflammation.

Dr. Marc Fournelle, IACOBUS project manager at Fraunhofer IBMT, commented, “One of the advantages of this method is that it enables us to detect the condition while it is still in its early stages, since many forms of arthritis affect the fingers first.”

The scanner operates using an optoacoustic imaging technique, in which the fingers are subjected to extremely short laser light pulses of variable wavelength. As the tissue absorbs these brief light pulses a minimal amount of warming occurs, which in turn causes the tissue to expand a tiny bit. This expansion then causes slight pressure pulses which the scanner registers using an acoustic transducer in the same way that ultrasound imaging procedures do. From the pattern of the pressure pulses the device can pinpoint exactly where inflammation is forming.

To refine the diagnosis, the optoacoustic procedure is enhanced by a hyperspectral imaging system. This involves scanning the finger with a strong white light, with the result that light of certain wavelengths is absorbed by the inflamed tissue. By analyzing which wavelengths are found in the light not absorbed by the tissue, scientists can determine whether or not the tissue is affected. The system also provides ultrasound images that are created using the scanner’s acoustic transducer.

Fournelle added, “The images produced by ultrasound depict soft tissue such as muscles, tendons and joint capsules as well as the surface of the bones, which means that our scanner gives physicians a familiar image to work with. The ultrasound image is then combined with the data from the hyperspectral imaging and the optoacoustic procedure, enabling doctors to clearly identify any sites of inflammation in the tissue.”