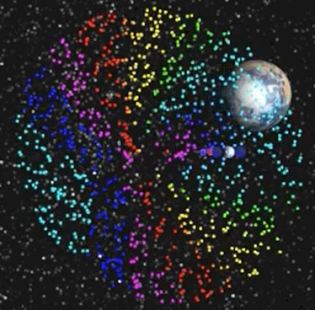 This month saw the twentieth anniversary of the discovery of a planet orbiting 51 Pegasi, the first confirmed detection of an exoplanet around a main-sequence star.

More than 1960 exoplanets have been spotted since then, as the direct and indirect techniques used to reveal their presence have become more sophisticated.

An ambitious scheme now under development by NASA could move the study of exoplanets onto a new level, as well as point towards a novel approach to space-based telescope systems.

The plan, christened Orbiting Rainbows, envisages using multiple lasers to control and manipulate a cloud of small reflective particles in Earth orbit, forming them into a functioning optical surface.

Compared to the costs and constraints of moving a finished optical mirror from the Earth's surface into space, persuading a floating swarm of particles to act as a reflective surface has several attractive features - and several novel technical challenges.

"With near-term plans to build 30-meter ground-based telescopes for astronomy, the demand for higher resolution optics in space continues to grow; not only for exoplanet detection, but also for earth-based science, including hyper-spectral imaging and monitoring of the oceans and land masses," commented Orbiting Rainbows' principal investigator Marco Quadrelli of NASA's Jet Propulsion Laboratory (JPL).

"Orbiting Rainbows is a Phase II NASA Innovative Advanced Concepts (NIAC) study looking into the future of creating a space-based observatory from granular media. We also call it a Granular Imager, or a Granular Spacecraft. The goal is to identify ways to optically manipulate and maintain the shape of a cloud of dust-like matter, so that it can function as an adaptive surface with useful electromagnetic characteristics in the optical or microwave bands."

Optical forces
The heart of the project involves developing a suitable technology to shape micron-sized glass particles into a specific surface, through light pressure exerted by laser sources. If successful, such a "cloud optic" would be reconfigurable with a variable focal length, and would ultimately also be disposable.

Optical trapping and manipulation has been understood for several decades, exploiting the simultaneous presence of gradient forces drawing small particles towards the narrowest point of a focused laser beam, and scattering forces pushing them along the propagation path. Orbiting Rainbows intends to use particles of 10 to 100 microns radius, which should require power levels within the scope of commercial continuous-wave lasers in the visible band, such as 532 nm Nd:YAG sources. 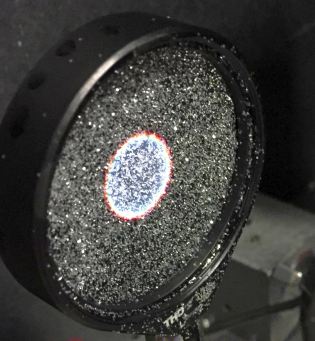 "Although the radiation pressure force on a macroscopic body is weak, a few milliwatts of focused laser power can achieve a force in the piconewton range, which we found would be sufficient to manipulate small grains in an orbital environment," said Quadrelli. "Our vision is that cloud trapping would be achieved by corralling the cloud with counter-propagating beams, two per axis."

In this plan, cloud shaping would be possible by using the optical gradient force to mold the cloud in the x-y plane, while a combination of the optical scattering force and other factors such as magnetic and gravitational forces control the cloud in the z-direction. Grain alignment would be taken care of by rotating the beam polarization state.

The Orbiting Rainbows concept envisages using robust computational imaging algorithms to allow the requirements on fine cloud control to be as relaxed as possible, and potentially using other mechanisms such as electromagnetic trapping to mold the cloud.

But if the overall principle proves successful, the use of "at a distance" sensing and actuation alongside the lack of physical hardware on the primary mirror will make Orbiting Rainbows a unique concept in astronomical telescopes.

Surface features
Preliminary experiments on the optomechanical interaction of laser beams with small objects in a liquid have already been carried out, and initial proof-of-concept experiments at the Rochester Institute of Technology in New York have formed a granular imager out of glitter to test how such a structure imaged two light sources.

The next steps will involve development of iterative techniques to reconstruct an original signal from the many individual images received from the random cloud, along with an experimental effort to stably levitate a small cloud of reflective grains in a liquid, as a precursor to more complex system-level tests. The necessary laser manipulation in the vacuum of space has not as yet been tested, although Quadrelli has confidence in the principle.

"Our recent work has investigated the feasibility of granular imaging system, concluding that such a system could be built and controlled in orbit," he commented. "We have studied computational imaging techniques for image reconstruction; wavefront sensing and control of the cloud optical figure; radar imaging architectures for tomographic imaging in the microwave band; and control algorithms to contain and shape the cloud."

If it can be made to work, the Orbiting Rainbows concept would represent a fundamental breakthrough in the ability to detect extra-solar planets. Quadrelli believes that the technology could potentially allow the surface features of exoplanets to be mapped, and the spectroscopic signs of life to be detected.

"The Granular Imager concept would allow the building of scalable and extremely fault-tolerant apertures at a reduced cost. It will directly enable classes of missions for exoplanet detection based on Fourier spectroscopy with tight angular resolution of ~100 milliarcseconds, and novel radar systems for remote sensing. These goals are important, due to the current need for low-cost implementations of space-borne imaging system architectures that can enable new science missions."