The US Department of Defense has awarded just over $53 million to Northrop Grumman Space & Mission Systems in a cost-plus-fixed-fee contract as part of the Solid State High Power Laser Weapon System Demonstrator (LWSD) program for the US Navy. The contract contains options, which, if fulfilled, could extend its value to more than $91 million.

The US Office of Naval Research has already funded the Maritime Laser Demonstrator, which was the first to demonstrate defeat of small boats at sea using a high energy laser. Recent advancements in the power and durability of commercially available solid state laser technologies have enabled the Navy to execute a quick-reaction effort and operationally field an SSL weapon.

The Navy Laser Weapon System (LaWS) was installed on USS Ponce in the summer of 2014. After a series of test and certification steps, LaWS is now the first-ever fully approved laser weapon system deployed by any U.S. military service. 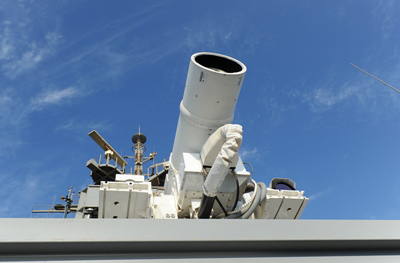 The Office of Naval Research commented that it wishes to continue the advancement of SSL weapon system designs, architectures, and component technologies. The contract award statement said: “The US government believes that improvements in lethality may be achieved through maturation and optimization of a variety of system characteristics, including laser power, beam quality, beam director architecture, and other physical and optical aspects of the laser system design.”

Based on its experience and internal investments, the Northrop Grumman team believes it is ready to fully support the three phases of the LWSD program, which if fully exercised, would increase the overall contract value to $91,057,597. Work will be performed in Redondo Beach, California, and is expected to be completed Oct. 21, 2016. If the extra options are exercised, work will continue through July 7, 2018.