Firm is latest to offer scrap dealers and others a hand-held laser tool for instant chemical analysis of metals. 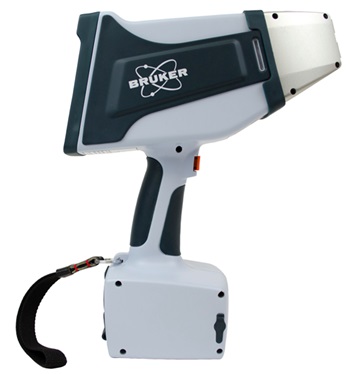 This is not a drill

With its “EOS 500” product, the Kennewick, Washington, company joins the likes of Oxford Instruments, SciAps, B&W Tek, TSI and Rigaku – all of whom have released similar equipment aimed at applications in quality control and scrap metal recycling.

The LIBS technique, which uses a pulsed laser to create a plasma on the surface of the target material that can be analysed using optical emission spectroscopy, is seen as complementary to conventional – but slower and more expensive – X-ray fluorescence (XRF) analytical tools.

LIBS is also one of the technologies used by the "ChemCam" instrument on board the Mars Curiosity rover to analyze the elemental make-up of rocks on the red planet.

Optics protection
John Landefeld, general manager of the Bruker Nano Analytics division's HMP business unit, said: “Advances in laser technology have enabled the miniaturization and portability of LIBS, which we have now commercialized in the EOS 500.”

The Bruker tool, which weighs only 2.4 kg, is said to be based around a proprietary 1064 nm laser that delivers low background noise. “Traditional LIBS systems utilize a high-energy, low-frequency laser design for plasma generation, which results in high background noise, especially in the lower end of spectrum,” explains the firm.

The claimed advantage of the stronger signal-to-noise ratio is that the EOS 500 eliminates the need for a complicated gating system. Bruker says that the tool can easily analyze challenging elements like silicon and magnesium, at very low concentration levels, within seconds.

Other features include an “air-flow optics shield” to protect optics from a build-up of dust when the EOS 500 is used in a harsh environment, and a multi-detector design that covers wavelengths from 170 nm in the ultraviolet region to 720 nm in the near-infrared. That allows detection of multiple low-weight elements that would not be possible with a single detector.

Beryllium advantage
According to a white paper on the Bruker web site, although XRF remains the “gold standard” when it comes to metals analysis, LIBS is especially useful for determining levels of light elements such as beryllium. This is seen as a particularly problematic element for XRF.

LIBS is also regarded as offering new capability for aluminum analysis, for example detecting lithium. “Generally, for scrap metal sorting, hand-held LIBS is expected to be faster for aluminum alloys and more or less equivalent to hand-held XRF for stainless steel,” claims the white paper, written by John Patterson from the company Portable Analytical Technologies.

Other benefits of LIBS include the ability to analyze small regions, such as welds, but there are also a number of drawbacks identified. These include that as a relatively immature method LIBS is not recognized by all authorities, and an inability to quantify carbon concentrations at certain levels. The creation of a plasma by the laser is also regarded as quasi-destructive.

However, for those measuring magnesium, aluminum or titanium, or metals containing significant amounts of beryllium, aluminum or silicon, the instrument of choice in the future looks likely to be LIBS.

SciAps venture round
Of the other companies selling hand-held LIBS equipment, UK-headquartered Oxford Instruments claims its “mPulse” tool to be the first hand-held LIBS analyzer for rapid scrap sorting.

The battery-operated technology, which Oxford gained through its acquisition of LIBS specialist RMG last year, is touted as the fastest aluminium sorter on the market.

However, Boston-based SciAps and Finland’s Lasersec have made similar claims about offering the first genuinely portable LIBS analyzers, in what is now looking like a surprisingly crowded market.

In fact SciAps has just completed a $4.3 million series B venture funding round off the back of its recent launch of commercial LIBS instruments, and says that the new money will accelerate the development of more hand-held tools.

The firm’s updated “Z-series” LIBS technology is said to feature a new proprietary laser that improves analyzer performance. “The new laser is a near-diffraction limited design that delivers 5-6 mJ pulses, at a 20 Hz rep rate, with nanosecond pulse duration,” it says of the “PULSAR” laser design.

Vertical integration
According to CEO Don Sackett (who features in the video below), SciAps is now vertically integrated on key components. “We manufacture our own spectrometers, which are smaller, higher resolution and span a wider range of wavelengths than anything we’ve found commercially,” he said in August.

“Combine our spectrometer capabilities with our exclusive technology license on the laser, and we’re in a great position to continue to rapidly advance these key components and enjoy major cost advantages,” Sackett added, highlighting a new extended-range spectrometer that covers wavelengths from 185 nm to 930 nm for certain applications.

“We’ve seen tremendous interest in our ability to measure halogens, oxygen and nitrogen with our Z-series handhelds, while also maintaining high performance in the critical 185- 680 nm region of the spectrum,” claimed the CEO. “Several other breakthroughs will be announced in the coming weeks and months.”