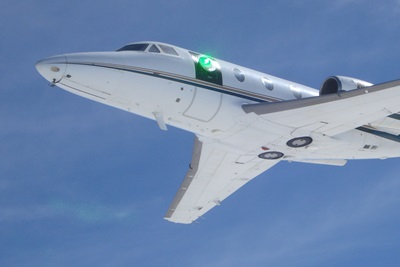 US defense contractor Lockheed Martin is touting an advance in optical technology that promises to bring the benefits of high-power laser weapons to aircraft.

Although laser weapons are still at the test and development stage, they are expected by many to find use in ground vehicles and ships over the next couple of years. However, because of the much faster speed of aircraft, alongside space and power constraints, their deployment in the air is likely to take a lot longer.

Now Lockheed says that its optical technology, based around a deformable mirror system similar in principle to that used by large ground-based telescopes to sharpen up astronomical images distorted by the Earth’s atmosphere, can overcome a key technological problem – turbulence. The company has been testing the system, albeit with a low-power green laser on board a business jet, for more than a year.

“The aero-adaptive aero-optic beam control (ABC) turret is the first turret ever to demonstrate a 360-degree field of regard for laser weapon systems on an aircraft flying near the speed of sound,” announced Lockheed. “Its performance has been verified in nearly 60 flight tests conducted in 2014 and 2015 using a business jet as a low-cost flying test bed.”

The company added in a press release: “As the aircraft traveled at jet cruise speeds, a low-power laser beam was fired through the turret’s optical window to measure and verify successful performance in all directions.”

2020 target mooted
According to Lockheed the ABC optical compensation system is based on deformable mirrors. Doug Graham, its VP of missile systems and advanced programs in the space systems division, said:

“This advanced turret design will enable tactical aircraft to have the same laser weapon system advantages as ground vehicles and ships.”

In September 2014 Lockheed said that initial flight tests of the ABC turret had validated its performance, adding that it would be put through an increasingly complex set of operations over the next 12 months.

The company also announced earlier this month that it was about to begin production of high-power fiber laser modules for military applications, with the US Army pencilled in to receive a 60 kW system suitable for mounting onto a truck.

But putting similar technology on a plane is a much more challenging prospect. Because enemy aircraft and missiles can come from anywhere, and at very high speeds, an airborne system must be able to track incoming threats with an ultra-rapid response time and then fire in any direction.

The laser turret, developed in a project funded by the Defense Advanced Research Projects Agency (DARPA), promises to do that – although it will first need to demonstrate the same kind of agility and precision that it has shown with a low-power green laser with a high-power fiber laser system.

According to Flight Global magazine, Lockheed has suggested that it could be possible to field a weapons-grade laser on board an AC-130 “Ghostrider” warplane for the US Air Force by the end of the decade.