Transformation of Madrid's entire street lighting system will see nearly a quarter of a million luminaires replaced by Philips. 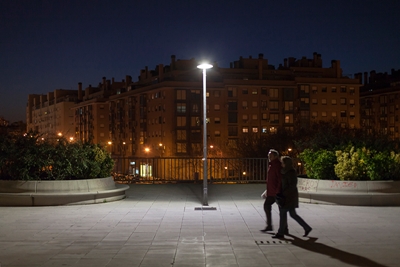 Philips’ lighting division, due to be spun out into a separate company at some point over the next year, has posted annual sales of €6.9 billion for 2014, down 3 per cent on the prior year on a currency-adjusted basis.

CEO Frans van Houten told investors that the division’s performance in North America was “unsatisfactory”, and he has appointed a new head of Philips’ America Lighting business - in the form of Amy Huntington.

He added that sales in China had been hit by deteriorating market conditions, but contrasted the wider divisional performance with the continued rapid growth in sales of LED-based solid-state lighting products and a huge contract to upgrade street lighting in the Spanish capital Madrid.

“Lighting recorded 20 per cent sales growth in LED and expanded its margins in LED despite strong price erosion,” said the CEO. The rate of growth means that LED sales represented 37 per cent of the lighting division’s revenues in the closing quarter of the year, up from 31 per cent a year ago. Sales of conventional lighting products fell by 14 per cent over the same period.

Over the past 12 months, the combined Lumileds and automotive businesses – which together employ some 8300 people - have delivered sales of €1.4 billion. Net income for the two units over the same period totaled €141 million.

Van Houten said that a number of non-binding bids for the combined unit had been received by Philips in December, and that binding bids would be in place by the end of the current quarter.

Lighting up Madrid
Philips estimates that the market for high-power LEDs used in general lighting will grow at a compound annual growth rate (CAGR) of 17-21 per cent through 2018, while the growth of the lighting market overall is pegged at between 3 and 5 per cent.

That rapid transformation of the lighting industry from inefficient legacy products to high-efficiency semiconductor technology has prompted the plan to spin off both the lighting business and the Lumileds/automotive unit, and is demanding rapid innovation.

Van Houten claims that Philips is spending upwards of 30 per cent more than its closest rival in relative research and development costs to set the pace of that technological development. He also expects the emerging area of data-enabled lighting systems – meaning optimized management and operations - to expand the overall market by around €1 billion within four years.

In the meantime Philips will be working on a huge project to upgrade street lighting in Spain. “We signed a contract to provide the city of Madrid with what is the world’s largest street lighting upgrade to date, involving the replacement of 225,000 luminaires,” said the CEO.

He added that the new system would provide energy savings of 40 per cent, which would effectively pay for the installation and mean that there is no additional cost to the citizens of the Spanish capital.

Van Houten told investors that the new system would feature an "integrated command center", meaning that street lighting could be controlled across the entire city from a single control point.

Another initiative will see more than 1.5 million Philips LED lamps distributed in India, to more than a million households. That is set to cut energy consumption for lighting by more than 80 per cent compared with the existing incandescent lamps, and mean that the local region will be able to save some 80 MW in electricity generation.

Overall, Philips’ annual currency-adjusted sales declined by 1 per cent, to €21.4 billion for 2014, with van Houten describing the year as “challenging” amid weaker demand in the key markets of China and Russia.

2015 will present further challenges and up to €400 million in costs as the firm implements the major parts of its restructuring plan, and this time next year the current Philips lighting division could be treated as an entirely separate entity.

Responding to rumors circulating about who exactly might want to buy the lighting unit, Van Houten said that while it was welcome to see interest in the division it was also very early days in terms of defining the assets and liabilities attributed to Philips Lighting - and that it would only make sense for a party to make a bid after a balance sheet for the business had been calculated. "There is no bid," he said.