Global sales of lasers for materials processing in 2014 will have grown by 8% to $11.6bn, says Optech Consulting. 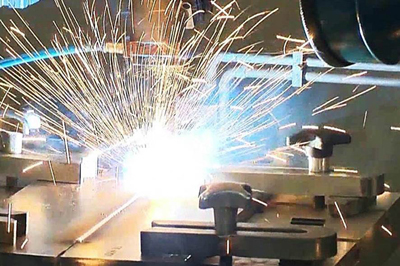 Structural steels can be joined by laser without developing "hot cracks".

The global market for laser materials processing systems reached a volume of US$ 11.6 billion in 2014. According to a preliminary analysis of 2014 data produced by Optech Consulting, based in Taegerwilen, Switzerland, that figure is up 8% from the US$ 10.7 billion achieved in 2013. The demand for industrial laser systems grew at double-digit rates in China and in Asia overall.

More than average demand growth was also reported for North America, while the European market grew less than average due to regional weak economic conditions. Globally, market growth was driven by laser systems for high-power cutting and welding applications as well as for precision processing, which includes low power cutting, drilling and welding, and additive manufacturing. In contrast, the demand for laser products for micro-processing in the electronics industry only showed moderate growth.

Of the laser types used in materials processing again fiber lasers outpaced other laser types in terms of demand growth. The increase of the global industrial laser systems market of 8% for 2014 is in line with the long-term average growth rate, which is, when averaged over economic cycles, in the 7% to 9% range.

Assuming a steady economic environment Optech Consulting expects an increase of the global laser systems market in the high single-digit range again for 2015 when measured in local currencies.

In an exclusive interview with optics.org, Optech Consulting's CEO Arnold Mayer explained how last year (2014) the industrial laser application segments that showed significant growing were somewhat unexpected: high power laser sales grew, as did welding and cutting applications, which was also unexpected. In the longer term, he expects to see the use of lasers for micro-processing to increase.

optics.org: Which applications under-performed, against expectations?

Arnold Mayer: "In 2014 there was lower demand than expected for laser applications in microelectronics processing. This includes processing of flat panel displays, semiconductors and printed circuit boards. Quantitatively, compared with what was expected for 2014, these markets were probably about 5% lower - for all manufacturers worldwide. 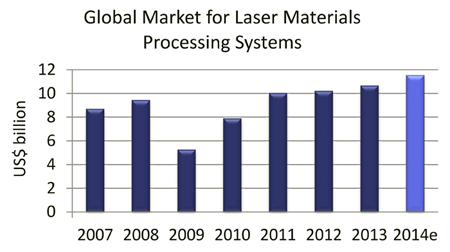 What determines growth rates in the electronics sector? Why are these difficult to predict?

"On the one hand, these end-user industries have very cyclical demand and investment patterns. On the other hand, demand for laser processing systems is also affected by the rate of significant innovation in these sectors, which is very difficult to predict. Some of the new technology trends need laser processing, while some competing technology trends may not need lasers.

“The innovations in laser-dependent markets, such as mobile phone manufacturing are difficult to predict. For example, will new smartphones use hardened glass or sapphire, and which laser processes will be used for cutting them? Or, what will be the growth rates for OLED displays in the coming years, for handheld high resolution displays and for big screens? Which technologies will these displays be based on, and which technologies will be used to make them? All this will affect the demand for lasers."

How does your growth estimate for 2014 compare to the performance of laser companies?

“At this time, our 8% estimate for the 2014 market growth is preliminary. We do not have the fourth quarter reports of the companies yet. When you read the financial reports available then, you will find that IPG Photonic's sales increased more than that of the industry and Han's Laser's sales increased more. Other major companies underperformed the average. Some of them underperformed because their product portfolio did not match the growth segments of the year, others underperformed because their geographic market exposure did not match the growth regions well, to give some reasons."

Optech Consulting's forecasts for the industrial laser market are often optimistic, compared with others'

“Our market forecasts are based on our assessment of growth opportunities. Giving forecasts in the high single range has been confirmed by the market. When averaging the laser systems market trend over economic cycles you will find a high single digit growth trend. Some other consultancies make conservative predictions, giving a market growth of a few percent, then they often adjust them upwards later, only to end up with the same ex-post growth rates."

"At present, there is no reason to expect that 2015 will be any worse than 2014, so we expect further growth in the high single digit range, subject to changes in the economic landscape. I should add that growth rates in 2015 will likely depend on the currency you use for measuring them. For example, if currency exchange rates continue at the present level throughout 2015 any market growth rates measured in euros will be significantly different from those measured in US Dollars."