Coherent, Spectra-Physics, Hamamatsu and others commit more than $30 million to Obama’s BRAIN Initiative. 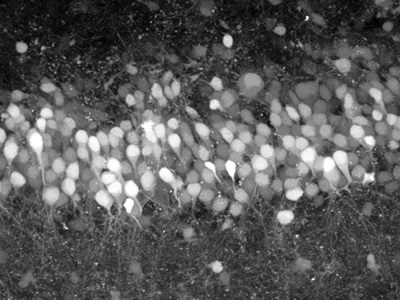 A group of optics and photonics companies are set to invest more than $30 million in support of President Obama’s ten-year Brain Research through Advancing Imaging Neurotechnologies (BRAIN) Initiative.

Recognising the potential for future applications in neuroscience through technologies like optogenetics, the firms joined forces with the National Photonics Initiative (NPI) to launch the Photonics Industry Neuroscience Group at a BRAIN conference hosted by the White House Office of Science and Technology (OSTP).

At that launch, the US National Institutes of Health (NIH) announced its first wave of funding under the BRAIN Initiative, with $46 million handed out to more than 100 investigators. Funded projects include new ways of classifying types of brain cells, using lasers to guide the firing of nerve cells, and entirely new brain imaging technologies.

Familiar photonics names
Industry partners involved in the NPI-led consortium, which will be focused on developing new optics and photonics technologies to help meet the BRAIN Initiative’s goals, include laser companies Coherent and Spectra-Physics, alongside familiar names like Hamamatsu and Thorlabs.

Tom Baer, chairman of the NPI’s steering committee, said: “The NPI industry group is truly the first of its kind – a multidisciplinary industry consortium focused on developing new optics and photonics technologies to help achieve the President’s goals for the BRAIN Initiative.

“Launching our industry consortium alongside OSTP signifies our joint commitment to solving the brain’s greatest mysteries through optics and photonics innovation.” 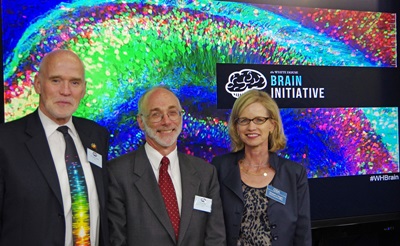 Technology challenge
Under the NPI, the industry consortium is expected to work closely with the BRAIN Initiative’s leaders, helping them to meet the overarching aim: in their words, to “revolutionize understanding of the human brain”.

More specifically, the key challenges for the photonics companies participating include developing the kind of imaging optics, laser sources, automated scanning technology and high-resolution cameras needed to provide up to a 100-fold increase in the ability to image groups of thousands of active neurons.

Miniature and implantable microscopes are also required, while there is a need for high-throughput protein engineering technology to develop a new generation of faster and more efficient fluorescent indicators of neural activity.

Launched in April 2013, the BRAIN Initiative is nothing if not ambitious. Speaking about the first wave of project funding, NIH director Francis Collins said: “The human brain is the most complicated biological structure in the known universe. We’ve only just scratched the surface in understanding how it works — or, unfortunately, doesn’t quite work when disorders and disease occur.”

Complexity means controversy
Pointing out the need for far better mapping and diagnostic tools than are currently available, he added: “There’s a big gap between what we want to do in brain research and the technologies available to make exploration possible. These initial awards are part of a 12-year scientific plan focused on developing the tools and technologies needed to make the next leap in understanding the brain.”

However, precisely because of the level of complexity indicated by Collins, both the BRAIN Initiative and Europe’s similar yet even more handsomely funded effort – the €1.2 billion Human Brain Project (HBP) – have proved controversial topics.

In July, hundreds of high-profile researchers said that they would boycott HBP. Their concern is that the apparent goal of building a large-scale computer simulation of brain activity is in fact far too ambitious to be achieved any time soon, and would pull funding away from other areas of neuroscience where useful results would be far more realistic.