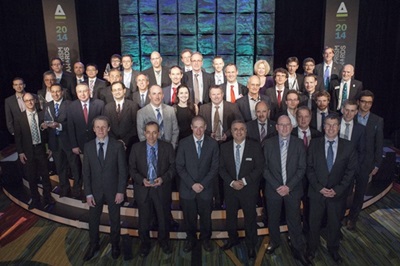 The deadline for entries for next year’s Prism Awards is approaching rapidly. Companies wishing to enter for a prize to recognize innovative products and processes across the various application sectors served by photonics need to complete their applications by October 10.

Sponsored by optics.org publisher SPIE and Photonics Media, the awards are open to any products sold, delivered or launched between 1 January 2014 and 1 February 2015. This year entries are sought in 12 different categories, including a new “additive manufacturing” sector.

Entries will be judged by an independent panel of industry experts, with the awards themselves due to be handed out at a gala banquet during next year’s Photonics West conference and trade exhibition in San Francisco.

Research to reality
The awards celebrate creativity and persistence as well as the versatility of photonics, says SPIE CEO Eugene Arthurs, and in particular the translation of promising research into viable commercial products.

“What should be the outcome of all the research work, all the intellectual firepower of our community?” he asks. “Expansion of human knowledge and understanding is laudable, but it is through new products and processes that research impacts people. Our Prism Awards honor the companies and individuals who have brought research to reality.

“Tools for the medical community, instruments for the factories or laboratories of the future: these are what make a difference. We celebrate the skills and talents that make research useful.”

This year’s Prism Award categories have changed slightly from previous instalments, and now include:

Shortlisted finalists are set to be announced in November and the winners will be announced 11 February 2015.

Of the 2014 Prism Award winners, several have gone on to collect more accolades or make significant progress.

Among them were Necsel, which has since won an exclusive deal to provide IMAX Corporation with lasers for giant, high-definition, projection systems. Meanwhile AccuVein, winner in the life sciences and biophotonics category last time around, has seen its vein viewing system pass certification standards in Europe.

• Full details of the submission requirements for the 2015 Prism Awards are available via the competition’s web site.