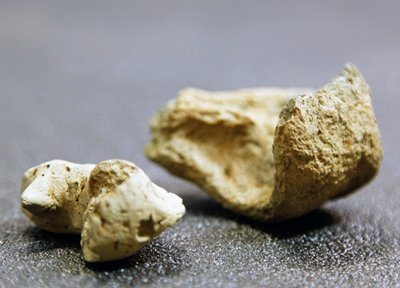 The larger of the two figurines could have been used as an oil lamp.

Clay figurines at least 5,500 years-old, which were discovered during archaeological excavations in Vantaa, Finland, in summer 2014, have recently been scanned with Finnish company Specim’ s hyperspectral camera. An archaeologist believes that the results reveal new possibilities of shifts of people in the Neolithic time.

The archaeologists’ theory that the bigger of the two figurines would have been used as an oil lamp could not be verified. Spectral signatures of seal blubber, which is still used in oil lamps by indigenous peoples inhabiting the Arctic regions, were absent from the spectral profile of the figurine. There were no traces of other organic materials such as blood on either of the figurines. However, the absence of the traces does not mean that they were not used; they may have disintegrated over the millennia.

The conclusions were made by comparing spectral profiles of figurines and reference samples. "It was interesting to notice that the method is suitable for the analysis of archaeological finds,” commented archaeologist Jan Fast, who brought the figurines to be scanned at Specim in Oulu.

“The analysis of the spectral profiles gave rise to several new questions regarding contacts in the Baltic Sea region during the Neolithic era, the manufacturing techniques of the figurines as well as their ritual use."

More on Pre-Stone Age Finland and the movement of peoples can be found here. 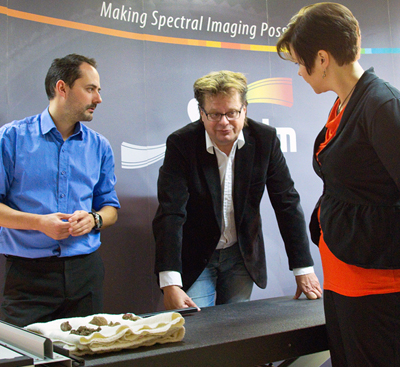 The scanning of the figurines was done as pro bono work at Specim. Georg Meissner, the company's managing director, commented, “The scanning of these archaeological figurines was very exciting for us and gives us an opportunity to show how valuable spectral imaging is in research and investigative work. We are a leading hyperspectral camera manufacturers and our business is growing stronger than ever with more product launches coming during this and next year.”

In the early 1990’s, following more than 10 years of intensive scientific research done by Finland's VTT Technical Research Centre, the Specim founders designed the first professional hyperspectral spectrographs and imagers. These first commercially available spectrographs were developed in close collaboration with NASA to meet the requirements of the most advanced applications in remote sensing.   So far, Specim has delivered more than 4000 instruments and spectrographs.

Jan Fast describes his team's research into the STone-Age Finnish clay figurines in this video (in Finnish).