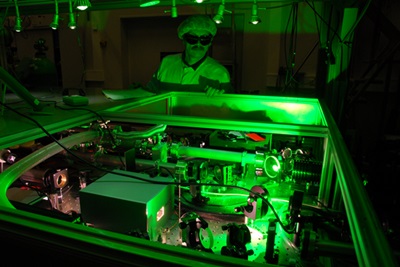 A partnership led by US-based National Energetics that also features Lithuania’s Ekspla and German technical glass specialist Schott has won a deal to build a 10 petawatt laser system – one of the four major beamlines that will eventually make up the Extreme Light Infrastructure (ELI) facility near the Czech capital Prague.

The consortium has agreed a contract worth more than $40 million to develop and install the ultra-intense system, part of a wider program backed by the European Union’s regional development funding initiative to create high-value science infrastructure and jobs in eastern Europe.

The laser system is set to become the most powerful laser of its class in the world, and unlike similar ultra-high-power sources it will be capable of producing high-repetition-rate femtosecond-scale pulses, each packing energies in excess of 1.5 kJ.

Once in service, it will provide a unique source of light for researchers working in areas ranging from plasma science and high-energy physics to biomedical and material sciences.

Jan Ridky, director of the Institute of Physics of the Academy of Sciences of the Czech Republic, said of the award: “Placement of the 10 PW laser contract concludes a major period of the ELI-Beamlines project: now, the design is completed and the construction of all laser systems, the heart of the future facility, will have started.”

Ridky added that the 10 PW laser facility would provide a “unique and powerful” tool to help researchers advance knowledge across a range of scientific disciplines.

Fast track
Being assembled by National Energetics at its Austin, Texas, headquarters, the system is said to be on a “fast track” to completion, which is expected by 2017.

The US company, set up by laser experts from the University of Texas, specializes in Ti:sapphire, mixed glass and optical parametric chirped-pulse amplifier (OPCPA) systems.

Its president, Todd Ditmire, said: “This laser pushes the boundaries of current laser technology toward peak powers yet to be seen in the laboratory. The techniques which will be utilized to realize such a dramatic improvement in peak power and high energy repetition rate will, without a doubt, have a major impact on the development of many high peak power ultrafast laser systems in the future.”

While Schott will provide the laser glass for the system, Lawrence Livermore National Laboratory (LLNL) has been sub-contracted to deliver technology support including the specialized gratings needed. Ekspla has wide-ranging expertise in solid-state lasers – including pump sources for OPCPA systems - and specialist power supplies.

Critical to the laser system is a liquid cooling technology developed at National Energetics, which the company says will enable it to operate at a repetition rate of around one pulse per minute – more than 20 times faster than any comparable kJ-class disc laser.

“This ideally suits the laser system for its role as the premier laser in the ELI-Beamlines facility,” said the Texas firm.

Built with around $350 million of funding, the four beamlines being constructed near Prague represent one of three “pillars” of the wider ELI project – with similarly powerful and groundbreaking laser-based systems set to be built in Hungary and Romania.