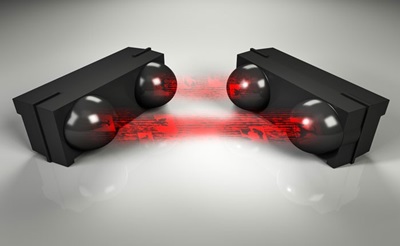 Researchers at the CEA Leti laboratory and the French start-up Luciom have launched a project to develop high-data-rate light-fidelity, or “LiFi”, transceivers based on visible-range LEDs.

According to the two parties, Luciom is planning to launch a fast, bidirectional product that can work with different LED lighting sources – and compatible with mobile devices – as soon as the middle of next year.

The team believes that the potential for “LiFI” is growing as LED lighting sources proliferate and become available at lower costs. They claim that using the visible range instead of the radio frequencies employed by conventional WiFi will soon provide a faster, more efficient and economical option.

They are not the only ones working on the LiFi idea. A team from the Fraunhofer Institute for Photonic Microsystems (IPMS) plans to showcase a prototype sugarcube-sized 10 Gbit/s optical wireless transceiver at next week's ECOC exhibition in Cannes, France - although this system is based on infrared light.

Earlier this year at the Light+Building show in Frankfurt, Leti demonstrated the basic concept behind wireless high-data-rate Li-Fi transmission, based on the high-frequency modulation capabilities of LEDs used in commercial lighting.

The laboratory claimed a data throughput of up to 10 Mbit/s at a range of three meters with an A19 lamp and an avalanche photodiode, which would be sufficient to stream high-definition video streaming. It used a light intensity of less than 10000 lumens, and suggested that the technology would work with both direct and indirect lighting. “This technology will be adapted to meet the needs of Luciom’s transceivers,” said the lab.

Luciom, which is backed by Bpifrance, the country’s public investment bank, is developing transceivers designed to exploit the digital nature of LED lighting for high-speed mobile device communications.

GPS boost
Its plan is to make “any LED lighting source a high-speed data transmitter that is both secure and environmentally friendly”. The firm’s technology effectively turns LED light sources into transmitter beacons, allowing smartphones and tablets to become “LiFi” enabled with a receiver that fits into in a standard 3.5 mm audio jack.

Luciom says that its technology can also be combined with the gyroscope sensors already embedded in smartphones and tablets to predict movement between two beacons, providing accurate positional information to the user.

“This way, communication between phones and smart indoor LED lighting can be used inside buildings when GPS technology is no longer effective,” it claims.

The latest collaboration builds on an earlier project in which Leti scientists developed an optical data link for Luciom that enabled transmission of HD video from a lamp to a handheld receiver.

“Our indoor geo-localization could guide shoppers through the maze of large shopping malls to the stores they are seeking, and LED lighting in museums could be used to guide visitors through an enriched tour of the displays and exhibits,” said Michel Germe, the Luciom CEO. “Working again with Leti, we will be able to bring new, bidirectional transceivers that enable these applications to market in 2015.”

Leti says that with the existing proof-of-concept and its long-standing expertise in RF communications, it expects to deliver LiFi with data transmission rates faster than 100 Mbit/s using LED lamps.