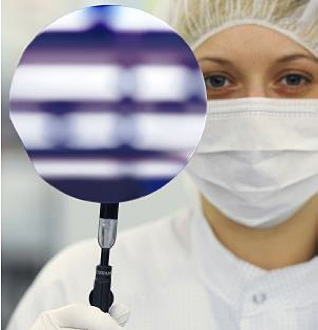 Work in progress? GaN-based LEDs on a 200mm silicon wafer.

The Roadmap is updated annually with industry feedback from a series of roundtables with experts and from attendees at DOE's SSL Manufacturing R&D Workshop, which this year was held in May in San Diego, CA. This year, the Roadmap’s analysis of LED cost drivers has been expanded, as has the discussion of the OLED manufacturing cost model, and a new priority task on OLED panel manufacturing has been added.

Recent DOE analysis by Navigant Consulting, reviewing U.S. adoption of SSL technology concluded that annual energy savings from LED-based lighting in 2013 more than doubled from the previous year to 188 trillion BTUs (55.1 billion kWh), equivalent to an annual energy cost savings of about $1.8 billion.

But despite this, market penetration is described as “still quite modest”. For one high-profile form factor, A-lamps, it was estimated that only about one percent of the installed base is LED lamps, although growth is accelerating rapidly. From 2012 to 2013, the U.S. installed base of LEDs in general lighting applications more than doubled to about 105 million units.

Navigant further concluded that the energy savings represents only a tiny fraction of the total potential energy savings of about 4.1 quadrillion BTU (1.2 trillion kWh) assuming complete adoption of SSL. The report stated, “While widespread adoption may be several years off, the potential highlights the importance of developing a robust, high-capacity manufacturing capability for SSL. Market adoption is likely to accelerate as prices continue to fall and unit sales are expected to increase at a much faster rate than revenues.” 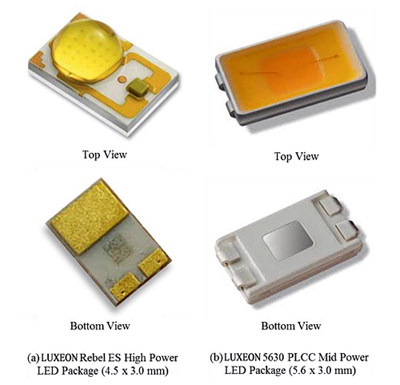 Some typical high- and mid-power LED packages by Philips Lumileds.

To identify priority tasks appropriate for funding, DOE engaged the LED community beginning with a "round-table" meeting to review the state of LED-SSL manufacturing technology. The meeting took place in Washington, DC in February, followed by the annual SSL Manufacturing R&D Workshop, in May in San Diego. R&D priorities and other conclusions are summarized here:

• For LED and OLED-based lighting products, long-term color stability is still poorly understood and mitigation approaches add to the cost of LED lighting products. The ability to understand and predict color shift over time would increase consumer confidence and cut costs.

• Luminaire manufacturing continues to change significantly in response to the new technology, with less emphasis on the lamp-fixture paradigm and increasing emphasis on integrated luminaires.

• Highly flexible luminaire and module manufacturing will be needed to address the rapidly expanding market.

• More attention needs to be paid to the manufacturing of phosphors/down-converters and the efficient application of these materials within the LED package.

• The OLED community is preparing to introduce products for lighting by working to understand the needs of luminaire and lighting designers – and to better understand market barriers to LED adoption.

Overall, the DOE Report concludes that “the primary challenge for LED lighting is to ramp up production and continue to drive down costs, while maintaining product quality and consistency. The emerging challenge is to demonstrate to the customer the added value offered by LED technology, whether it is reduced energy consumption, extended lifetime, or added functionality, and to avoid customer disappointments.