Optical microscopy platform from VisionGate could have implications for 3D pathology techniques. 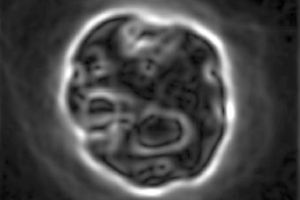 An optical technique able to spot the tell-tale changes in DNA content of cell nuclei during the earliest stages of cancer could offer valuable screening and surveillance in the fight against some forms of the disease.

Optical projection tomographic microscopy (OPTM), developed by a team at the University of Washington and commercialized as Cell-CT by VisionGate, employs computerized tomographic reconstruction methods analogous to those used in an X-ray CT scan. But its data comes from an optical examination, rather than an X-ray.

A paper published in SPIE's Journal of Medical Imaging assessed how well the technique could detect aneuploidy, the presence of an incorrect amount of DNA material in a cell nucleus that can be an early indication of cancer. The results show that OPTM was fully capable of providing results on a par with the gold-standard flow cytometry and image cytometry methods used by pathologists.

"OPTM stemmed originally from our wish to take microscopic images by simulating an X-ray," said Eric Seibel of the university's Human Photonics Laboratory (HPL). "One way to do that is to use an optical system with a high numerical aperture and high magnification lens, and scan that very thin focal plane through a very small object, such as the nucleus of a single cell."

In the Cell-CT platform, a widefield optical microscope is adapted with a customized rotation stage. Cells, their nuclear material already stained by standard techniques, are carried by an optical gel along a 50 micron channel in a microcapillary tube, which rotates around its long axis. A fast mirror scans the objective focal plane axially through the sample.

The result is a large data set of "pseudo-projections," generated as the sample tube rotates. Algorithms adapted from those used in an analogous fashion for conventional CT images then turn the slices of visual data into a 3D image of the stained nuclear material of the specimen, with a resolution of 0.35 microns.

"This was essentially a calibration exercise," commented Seibel. "We wanted to make quantitative measurements on different standard cultured cancer cell lines, and see if OPTM could match results from flow cytometry; and we found that it could. We also wanted to see how to automate the process as much as possible, since 3D analysis is more difficult for humans to perform than 2D analysis, and computational power is needed."

Earliest signs of cancer
The implications for both cancer detection in certain specific scenarios and the wider development of new pathology techniques could be significant.

Crucially, the technique could help to spot aneuploidy in small numbers of sample cells, potentially revealing the presence of cancer before other clinical signs materialize. Flow cytometry works on large numbers of cells and assesses whole populations, making it less able to spot the rare abnormality in a limited group of cells; but OPTM could be ideal.

In particular, VisionGate has positioned Cell-CT as means to spot the earliest signs of lung cancer, by using it to assess sputum samples from high-risk individuals, such as ex-smokers. Further developments in the platform are under way to automate the image analysis operation further, and also to boost the speed of the overall process, with the goal of imaging one cell in full 3D every second.

"There is a very good chance that 3D image analysis is the only way we can go for really early detection of cancer, early enough to allow implementation of therapeutic drugs to tamp down its progression," commented Seibel. "These types of techniques could become prominent for testing of sputum, urine, or in other instances where a sample can be taken with a needle and analyzed. Potentially this could all be done without a pathologist present."

Scanning fiber endoscopes
Another project in HPL's portfolio could provide some beneficial synergy with the developments in OPTM technology, both being funded by the National Science Foundation, Bioengineering Division.

HPL is developing ultrathin flexible scanning fiber endoscopes, intended as a further means to facilitate the early detection of cancer within the body and access areas previously inaccessible. Latest trials have involved using the endoscopes to produce high-resolution images from extremely confined spaces, such as the fallopian tubes, as a guide to intervention.

In the future HPL wants to equip the endoscopes with micro-biopsy capabilities, fitting an epithelial tissue sampler within the small space available in the instrument. This could potentially take samples from tricky locations such as the peripheral lung, the bile duct or the pancreatic duct - all places where cancers are rarely spotted before they are well developed.

"A possible scenario for lung cancer would involve using the Cell-CT for the screening or surveillance from sputum samples, then localizing positives using low dose conventional CT imaging, before taking the biopsy or guiding in situ therapy with an ultrathin flexible bronchoscope equipped with biopsy capabilities," noted Seibel. "Harvested microsamples of cells and tissue can then be analyzed again on the Cell-CT, effectively using OPTM twice in the same regime."

The micro-biopsy itself could even prove therapeutic in some scenarios, given that the taking of even a 1 millimeter chunk removes millions of cells. "You may have taken the whole malignancy," said Seibel. "When that happens now it is typically accidental, but in the future a biopsy under this regime could itself become a form of therapy."

In the meantime, OPTM has immediate advantages to offer. Its generation of 3D images from absorption stains rather than fluorescence sets it apart from other 3D microscopy techniques, allowing it to exploit the long-term consistency of correctly stained samples. Single-cell 3D information about stained cell volume and shape cannot be accurately gathered by flow cytometry or image cytometry.

"This technique will be very important for cytopathologists who rely primarily on cell morphology data for cancer diagnosis," noted Seibel. "But moving pathology into the third dimension will not happen rapidly. The 2D techniques have been in place for a hundred years, and much of modern medicine is built on them. The change will be slow; but we are putting the pieces in place to help it along."