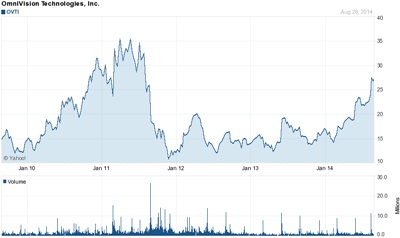 At $406.5 million for the three months ending July 31, revenues were up 9 per cent on the same period last year. Rising demand from the mobile phone sector and what CEO Shaw Hong described as “very impressive” growth in automotive camera applications also saw the firm’s pre-tax income more than double to $33.7 million.

With profit margins helped by a swing towards sales of the company’s newer and higher-resolution products, Hong told investors:

“We are extremely pleased with our success in China and we expect this market will continue to be a major driver of our future goals. India is the next large market to experience a major transition to smartphone with high-resolution cameras.”

Hong declined to comment further on the proposal in his investor call, but Hua’s valuation is higher than OmniVision’s stock has traded for the vast majority of its 13-year period as a public company. Only for a brief spell in 2011 has the firm’s stock traded at higher than $30.

Automotive momentum
The automotive camera market has been heralded by Hong as one of the new growth drivers for OmniVision and he says that the company is benefiting now that so-called advanced driver assistance systems (ADAS) are being widely embraced by automotive OEMs.

“Since ADAS requires multiple cameras for functions such as lane departure monitors, pedestrian and obstacle detection, and mirror replacement, the number of cameras for cars has also increased dramatically,” he said.

“Over the last few years, our automotive business has been our fastest-growing market and we believe the launch of new technologies such as ADAS will drive further growth for years to come.”

OmniVision’s sales chief Ray Cisneros reported that the company had shipped some 249 million units in the latest quarter, compared with “only” 201 million units in the prior period. “The increase in volume was predominately driven by increases in five megapixel and high-definition sensors,” he noted.

Phone applications still dominate OmniVision’s sales, and accounted for 69 per cent of revenues in the latest quarter. And although automotive applications are dwarfed by that total and represented only 5 per cent of sales, the sales figure for this sector was up 50 per cent year-on-year.

“Given the success that we have experienced in automotive, we will report on this market as a separate category beginning in fiscal 2015,” Cismeros said. “The automotive market will include camera systems that are embedded in the automobile by the OEM as well as camera systems sold in the after market to consumers.”

Despite the recent momentum gained, the company said that seasonal trends relating to its current product mix would put a brake on revenue growth in the forthcoming quarter, with revenues expected to be in the range of $360 million to $390 million.