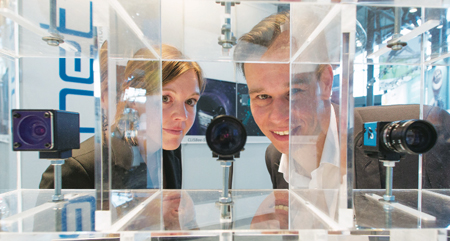 The second Vision Russia Pavilion and Conference, supported by Messe Stuttgart, will be held in Moscow’s Expocentre, from June 17 to 18 2015. The event, said to be the only exhibition for machine vision in Russia will be showcasing and discussing vision systems and technologies with a wide range of industrial and other applications.

As with the 2014 event, next year’s Vision Russia will be collocated with SEMICON Russia, a forum for the microelectronics industry in Russia; MV systems are widely used in semiconductor industry for the quality control and testing of silicon wafers and components.

The 2015 event brochure offers several reasons why Russia is a good location to host an MV event: “Russian Government development programs are based on long-term support for innovation; Vision Russia aims to shape complementary industries and conquer the country’s untapped machine vision market. Russia has the third largest monetary reserve in the world, which is being actively invested in hi-tech infrastructure projects. Furthermore Russia is the economic and transport hub for many CIS countries.”

The VISION Russia Pavilion & Conference was launched in May of this year. Spokeswoman Tatiana Sevostyanova said the debut exhibition offered a new market place with experts visiting from countries including Belarus, Ukraine, Germany, Denmark, Finland, the USA, Korea and Iran. The total number of visitors registered for the two specialized events exceeded 1,500 people.

"Unlimited potential for the future".

She stated, “Judging by the key industry players in Russia, the local market for MV systems shows positive dynamics and unlimited potential for the future in both industrial and non-industrial applications. Today, MV systems are in demand by the Russian manufacturing, food processing and pharmaceuticals industries, while the Western market highlights the opportunity in automotive and electronics sectors. The increase in automation will become the growth driver for the MV market in Russia.”

Of the 2014 show, Maxim Soroka, general director of Vitec, a St Petersburg-based industrial measurement and automation company, said, “In terms of global markets, the Russian enterprises competing with European and Asian manufacturers have no other choice – either they will implement machine vision technologies or they will disappear.

“Interest in MV technologies in Russia is growing daily. But it is important to understand that manufacturers of cameras, optics and software can only expect successful business in Russia if they are prepared to invest with patience and to help develop the domestic market.”