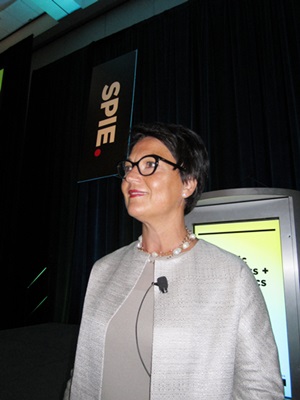 by Ford Burkhart in San Diego
Early, reliable diagnosis of infectious disease in remote locations – the current ebola outbreak in Africa being one obvious example - is critical to saving lives. And new disposable biosensors based on organic materials have the potential save “many lives”, according to Luisa Torsi from the University of Bari in Italy.

Outlining her group's work in a plenary session dedicated to organic photonics and electronics, part of the SPIE Optics + Photonics symposium taking place in San Diego this week, Torsi hopes the technology will bring exactly such benefits one day.

In principle a patient would use a small device, possibly as simple as a piece of paper featuring printed circuits based on organic transistors, to collect a fluid sample – for example blood, saliva or tears. A remote device would then measure the concentration of a chosen analyte, and transmit the result wirelessly.

“The goal is to have an early diagnosis of a disease, at a low concentration - as low as picomolar concentration,” Torsi said. “This would offer a non-invasive test that could help screen a large population against a disease, perhaps one that is feared to be present but has not yet exploded.”

“This biosensor is not too costly and would not require much time to get results,” she said. The direct method of screening would avoid the time needed to collect and send a sample to a distant clinical laboratory – during which time the patient’s condition may worsen and spread to others.

Point of care
This, she said, could be an effective form of point-of-care diagnostics. “It can be done where it’s needed, in your house, in the field, in a village, in any remote place,” she said. “The potential is very large, for saving money and time, and even human lives, and overcoming the isolation of the patient.”

Her lab, at the Universita Degli di Bari Aldo Moro, where Torsi, is a professor of chemistry, has achieved promising results working with a disposable bioreceptor that detects C-reactive protein, or CRP. Found in blood plasma, the molecule is a marker for early detection of inflammatory diseases.

“It works well, with blood samples,” she said. “It is a general-purpose platform that can be used to detect many other analytes.” That could in the future include ebola, the latest outbreak of which has caused 1,350 deaths in four nations of West Africa – the deadliest episode on record. 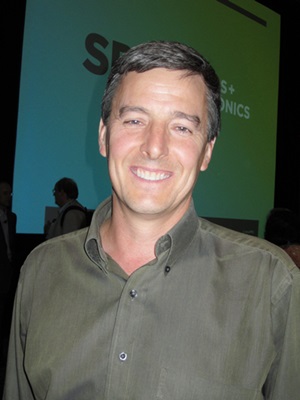 'Resorbable' sensors
Instead of a pharmaceutical approach, doctors might one day try an “electroceutical” approach with patients, implanting a “transient” set of electronics that subsequently dissolves into a patient’s body like absorbable sutures.

“We have the capacity to implant such electronics that are entirely compatible with the body,” said John Rogers from the University of Illinois at Urbana-Champaign, also speaking at the organic photonics and electronics plenary session in San Diego. Described as “resorbable”, such devices could be useful in cases of traumatic brain injury or infection, to monitor temperature and intracranial pressure, before vanishing inside the body.

Citing examples such as allowing a wound to heal, or removal of a cancerous tumor, Rogers says that medicine could use high-performance implants that are robust, but “only for a finite time period”. Then, by exposure to water, they would simply disintegrate and become environmentally benign end products.

The building blocks would be nanomaterials made from organic molecules. “Our knowledge of these materials is relatively immature,” Rogers admitted. “There is a lot of work to be done here.”

But, illustrating the potential, Rogers said that a device based on 35 mm-thick silicon would degrade rapidly into silicic acid. “The amount would be very tiny, just a few nanometers a day,” he said. “It would all be gone in days.”

In his lab, such devices also dissolve well in the acidic environment of Coke – with a pH of 2.6, the soft drink is highly effective at erosion.

In one case, his lab even built a tiny digital camera using such materials. “It had coarse resolution, but the whole thing was transient,” Rogers said.

Treating infection with “electroceutics”
A key step, he said, is to control the rate of erosion by housing the device inside a capsule of bioresorbable material. That capsule then defines the functional lifetime of the device. After the capsule is gone, the rest “degrades very rapidly,” he said.

One potentially huge benefit could be elimination of infection following surgery – a hot topic given growing concern over the lack of new antibiotics to treat an increasingly drug-resistant set of bacteria.

The idea is that as a bacterial colony develops, a transient device could deliver wireless power sufficient to kill the bugs. That, he said, is what’s called “an electroceutical approach”. In theory, the device could protect the body during the critical risk period immediately after surgery, and then be simply broken down by the body over the course of two or three months.

A silicon membrane inserted into the fluid in the cranial space could read changes in resistance and provide a measure of the pressure over the critical few days following surgery. Using rat models, he said that the approach “looks pretty promising”.