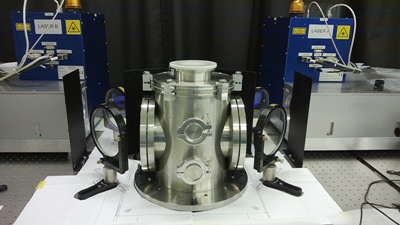 Engineers at the first of the Extreme Light Infrastructure (ELI) locations under construction in eastern Europe have installed a laser amplifier head that will provide scientists with ten petawatt-scale pulses of energy every second.

Built by a team at the UK’s Central Laser Facility (CLF) under a £2.2 million deal, the amplifier is based on the design developed through the CLF’s “DiPOLE” project, and uses ceramic ytterbium-doped gain material. DiPOLE is short for “Diode Pumped Optical Laser for Experiments”.

Major contract
The laser head was delivered to the ELI Beamlines facility currently being built near the Czech capital Prague, in what was described as the first major contract of its kind between the UK Science and Technology Facilities Council’s Centre for Advanced Laser Technology and Applications (CALTA) and the Czech Republic’s Institute of Physics (IoP).

Once fully operational, the Czech “pillar” of ELI will comprises a series of four laser beamlines that will provide an unprecedented combination of ultra-high-power pulses and high repetition rate. Scientists will use the facility for basic research cutting across medical imaging, biological sciences, astronomy, materials engineering and more.

Following a week of intensive work, the installation of the new amplifier head was signed off by Bedrich Russ, the chief scientist at ELI Beamlines, and CALTA manager Justin Greenhalgh.

Russ said in a statement from STFC: “We are delighted with the outcome of this highly successful project and look forward to putting the laser head to use in one the four massive laser systems that make up ELI Beamlines here in the Czech Republic.”

“Having access to this cutting-edge technology is helping us to produce a state-of-the-art facility for scientists from around the world to use. The excellent level of co-operation between STFC and IoP has set a solid foundation for future work.” 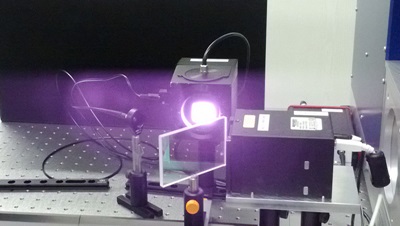 He highlighted that as well as enabling the combination of high-power pulses and fast repetition rates, the DiPOLE technology also operates at a very high efficiency compared with more traditional high-power laser systems.

Part of a huge project backed by the European Union’s regional development fund, ELI Beamlines will be followed by “ELI Attosecond” in Hungary – where the focus will be on even shorter pulse durations – and “ELI Nuclear Physics” in Romania, which will combine two 10 PW lasers with a high-intensity source of gamma rays.

The UK’s CLF has long been one of the key locations for such ultra-high-power lasers, and is home to the petawatt-scale Vulcan laser. However, one of the drawbacks of Vulcan is that it can only produce such pulses at a rate of three every hour.

“Being able to operate high power lasers at high repetition rate is key to developing applications such as medical imaging and radiotherapy for industrial use,” says STFC.

Earlier this year, ELI Beamlines announced a deal with the Austrian laser company Femtolasers and the US Lawrence Livermore National Laboratory (LLNL) for the supply of an ultrafast pulse seed laser and high repetition rate advanced petawatt laser system that will form a critical element of the Prague infrastructure.

An optical system combining the seed oscillator with a multipass amplifier and other key elements is scheduled to be delivered to LLNL by August 2014. The assembled system is then scheduled to ship from LLNL to Prague in 2016, with “first light” of the facility's third beamline currently expected sometime in 2018.