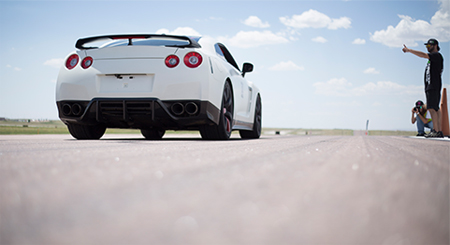 Job done: once fixed, ER's Evo went on to win a speed trial.

Entitled Metal Technology and English Racing push the envelope with Direct Metal Printing from 3D Systems, the webinar revealed how technicians and engineers from the companies rapidly transformed an engineering challenge into a stainless steel solution. They 3D printed an oil pump gear in 17-4 PH Stainless Steel, installed it on the vehicle’s engine, and within three days the race car was successful in track testing at almost 200mph.

English Racing tunes and races high-performance cars. The team’s Mitsubishi Evolution was exceeding oil pressure limitations at high RPMs, a problem that had already destroyed several engines. The team at English Racing devised an engineering solution but could not justify a costly and time-consuming bespoke casting process to test out the idea. Instead, they turned to Metal Technology (MTI) in Albany, Or, for a solution. MTI used its ProX 300 Direct Metal Printer from 3D Systems to print the necessary parts.

The 3D Systems hosted webinar brought together all parties involved.

Gary Cosmer, CEO of MTI told the webinar audience, “Prior to 3D printed metal components, the costs of designing and fabricating one-off or small batches of parts was prohibitive in most cases. 3D printing opens up a new way of engineering components that are lighter and perform better, because there is no limit on complexity. Engineers can design exactly the component they need, without worrying about whether it’s possible to manufacture it. 3D System’s ProX 300 can print parts that are impossible to make any other way.”

English Racing had an innovative approach to the problem using a new pulley with a larger diameter, which would rotate more slowly and thereby lower the oil pressure. MTI printed the part from specification within five hours, and in three days it was installed in the car and running on the test track. Three months later, the English Racing team put its new oil pump pulley to the test at the Pikes Peak ½ mile top-speed event and achieved 184.9 miles per hour, winning first place in “Sedan Class”.

Zack Morgan, Technician and Tuner at English Racing, told the webinar audience about the specifics of his engineering challenge: 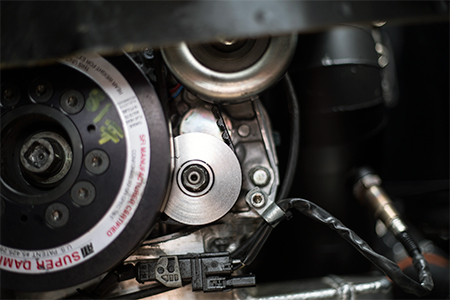 “The car you are hearing about today is a 2003 Lancer Evolution, which has our 2.2 liter stroker engine, known as the 4G63 engine. This is a 134 cubic inch engine, which delivers 1250-1300 horsepower. We run typically 50lb of boost pressure and 100lb or more of oil pressure at times, which is basically the most extreme environment you can put an engine through.

“We had a problem with the car’s oiling system, which was really two problems – one is an over-pressurization problem, the other was oil starvation, which is a by-product of pumping oil to the top of the engine at high revs. We needed to slow the oil pump down so that we would under-drive it by 10%, which was controlled by a gearing addition. For this, there were a lot of design challenges. What we needed was a 3D model and get that to someone who could designing it for production.”

MTI’s Gary Cosmer picked up the story, “My connection with ER came through social media, because when we took delivery of 3D Systems’ Pro X 300 tool I posted an announcement on our Facebook page and Zack saw it quite quickly and gave me a call. I immediately realized that the Pro X 300 could help them with this challenge. Together, we mocked up a pulley gear in plastic just to test fit and finish, made a few minor changes and we were able to quickly print the next version in 17-4 stainless steel. Then we were able to move into actual production.

“By conventional means, this particular pulley would have required: at least two lathe operations, a mill operation; and, most likely, an EDM operation. W e would also have needed to make custom fixtures to hold the part while it was being machined, we would have needed specialized tooling and would have had to write all of the CNC code to run on the machines.” 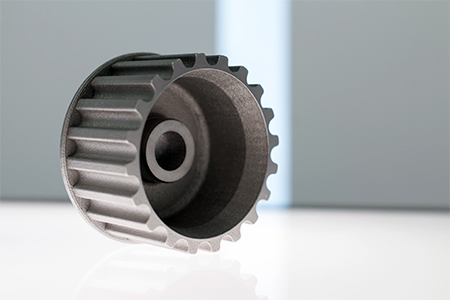 Additive Manufacturing was a perfect match for developing the gearing.

”So we decided that the Pro-X 300 was the best solution and additive manufacturing was a perfect match for this particular part. There was no stock to order, no minimum quantities, we had the 17-4 steel powder in-house, no fixtures to make, no CNC programming, no tooling to purchase, it was faster and lower cost, it was mostly unattended operation, and within 5h we were able to heat treat to finish the part and then bolt it to the car.”

3D systems’ VP Product marketing, Tom Charron concluded with a description of the Pro-X series of LAM equipment: “The ProX 300 3D printer makes additive manufacturing an industrial option for the production of metal parts. It is the largest in our range, offering a build volume of 250x250x300 mm, and featuring an automated material loading and recycling system, and supports materials including Maraging 1.2709, Stainless 17-4PH, Ti6Al4V, AlSi12.

”Its finish quality is also very high – the Pro-X can build very uniformly with fine features, down to walls of 150μm, and with excellent surface finish e.g. with cobalt-chrome a 6μm surface roughness and very fine detail definition.”