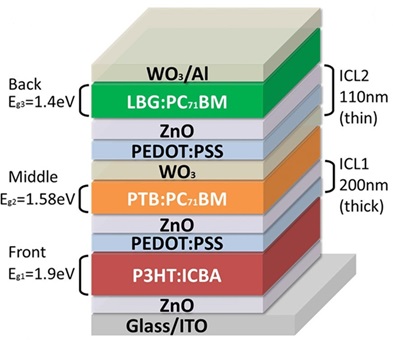 Researchers in the US have developed a small-scale polymer solar cell with a conversion efficiency of 11.5 per cent – eclipsing the previous best of 10.6 per cent set by the same team but lower than the 12 per cent mark with small-molecule organic technology set by Heliatek last year.

Yang Yang’s research group at the University of California, Los Angeles (UCLA) improved the performance of its earlier tandem cell by incorporating an additional junction. The new triple-junction design is similar in principle to the high-efficiency multi-junction cells used to power satellites, and is considered by the team to be the best demonstration so far of such technology with organic material.

UCLA graduate student Johnny (Chun-Chao) Chen, part of the team, said: “Our work is not the first demonstration of a triple-junction polymer cell, but it should be considered as the first ‘successful’ demonstration.”

That is because earlier demonstrations have disregarded important features such as optical interference in triple-junction designs, and the suitability of interconnecting layers.

Following detailed analysis of each sub-cell inside the triple-junction polymer cell and extensive optical simulation work, the UCLA team were able to optimize the photocurrent gain with virtually no voltage loss – the key to improving the cell’s efficiency to 11.5 per cent.

According to the group’s recent paper, published earlier this month in the journal Advanced Materials, the cell is based on junctions with respective front, middle and back sub-cell bandgaps of 1.9eV, 1.58eV and 1.4eV.

“Through optical simulation and the transfer matrix formalism (TMF) modeling method, we could overcome the difficulty of current matching the sub-cells and simplify the process of fine-tuning the thickness of each sub-cell and interconnecting layer,” they wrote. “Our results also suggest that triple-junction tandem solar cells have great potential for use in high-performance applications.”

Mimicking III-V cell designs
Chen and colleagues explain that the design closely follows principles established during the development of triple-junction cells based on III-V semiconductors, which are now widely deployed in space applications.

“By mimicking the design of III-V multi-junction solar cell, we also prove that organic solar cell has as much potential as other inorganic solar cell technologies [from an] efficiency standpoint,” they said. “The only obstacles in organic solar are processing compatibility and interfacial layer design.”

Despite the record efficiency, the new polymer cell is far from the finished article. For one thing, the “hero” device has an area of only 0.1 cm2, although work is progressing towards a larger demonstration.

Chen added: “One of the current on-going projects also involves enlarging the size of tandem solar cells for prototype demonstration. A different manufacturing machine is involved and we are currently transferring our experience to that platform.”

Transferring organic photovoltaics from the laboratory to an industrial scale has proved difficult thus far, but he points to recent work led by a team from the Technical University of Denmark demonstrating roll-to-roll production of a polymer tandem cell as an indication of progress.

“They found [that] the extra few layers of coatings do not add much complexity to the process, but it can benefit the efficiency significantly,” Chen told optics.org.

OLED benefits
The UCLA team is also redesigning the interconnecting layers that are used to connect the various sub-cells in a tandem device, so that every layer in the semiconducting stack can be solution-processed.

“We believe this will ensure us a smooth transition to the large-scale prototype demonstration later on,” they say.

Other tough challenges include ensuring the reliability and extended stability of organic cells, but it is hoped that the recent commercial development of organic LED (OLED) televisions by the likes of Samsung will help enormously.

“We learned our encapsulation from the OLED industry,” Chen said. “The OLED materials are operating at high voltages and currents all the time, [but] reliability issue is not an issue for them because of the proper encapsulation. We believe with proper sealing, organic solar cells can have lifetime of five years and above.”

In terms of potential commercialization, Chen says that the group – which collaborates with Sumitomo Chemical on materials development - is open to other licensing partners.

In the meantime, further work will focus on reaching higher efficiencies and introducing the triple-junction concept to developers of other novel solar cells, for example in hybrid cell designs incorporating perovskite and CIGS materials.