Much-trailed $350 accessory puts infrared imaging hardware in the hands of the consumer. 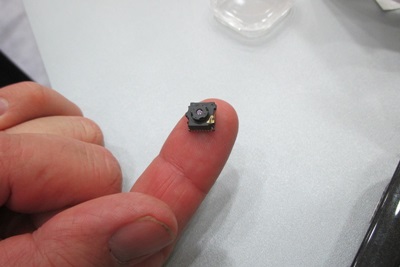 Thermal imaging company FLIR Systems has formally launched its “ONE” smart phone accessory, in the hope that mass adoption by the consumer market will revolutionize a sector previously dominated by military applications.

Trailed by the Oregon-based company for much of the past year – FLIR showed off a proof-of-concept prototype using its “Quark” sensor core at an event last August – the commercial release could also mark a turning point in FLIR’s fortunes, which have been hit by recent declines in military budgets around the world.

Now based around the “Lepton” core, an 80x60 pixel resolution sensor featuring a wafer-scale lens and an uncooled long-wave infrared (LWIR) microbolometer focal plane array, the ONE accessory weighs under 4 oz and can be “snapped” onto an iPhone 5 or 5S model.

It captures light in the 8-14 µm wavelength range, typically consumes 150 mW power and comes with its own rechargeable battery, which FLIR says is good for two hours of continuous use.

FLIR is hoping that consumers will use it for applications ranging from spotting leaks in their homes and optimizing energy efficiency, to searching for lost pets at night.

But perhaps more fundamentally, the company is urging consumers and applications developers to dream up whatever uses they like, the approach that has proved so successful in the world of smart phone applications.

The sixth sense
At SPIE’s DSS 2014 exhibition in May, FLIR showed off the ONE accessory and told optics.org: “The market will reinvent what thermal is. Nobody here knows what that app is. Let everybody go play with it.”

In a company statement accompanying the official product launch, CEO Andy Teich said: "FLIR is dedicated to developing and delivering technologies that provide users with a sixth sense.”

“Based on technology that was formerly reserved for the military, FLIR ONE is the first in a new generation of affordable thermal imaging devices designed to inspire imaginative and innovative uses by consumers. This represents a revolutionary step forward for both FLIR Systems and thermal imaging.” 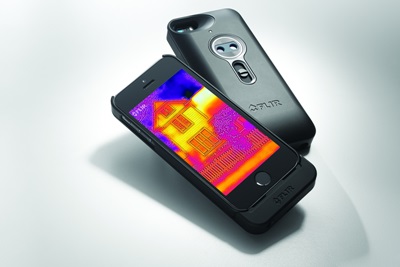 iPhone snap-on: the FLIR ONE accessory

As well the basic FLIR ONE application, which will be sold via the Apple App Store, others scheduled for release currently include time-lapse software designed to reveal changes in temperature over time, a “Paint” app for sharing dramatic imagery, and “Panorama”, which converts a set of thermal images into a single panoramic one.

FLIR says that units pre-ordered through the firm’s dedicated web site will ship to consumers starting the week of August 4, with availability in Europe is expected to start by the middle of the month. Availability in other regions will follow shortly afterwards.

FLIR ONE will also be sold via Apple’s web site and in its retail stores, first in the US and Canada before a global roll-out.