Capital will support company's operations through 2015, says the developer of polymer electro-optics. 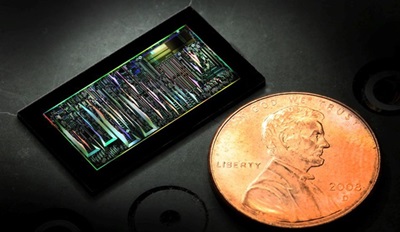 Colorado-based Lightwave Logic has raised $3 million in a sale of common stock and warrants, meaning that it will be able to continue operating through the end of next year.

The research company, which is working closely with the University of Colorado and the OpSIS silicon photonics foundry at the University of Delaware but is yet to post any significant product sales, had been subject to a “going concern” notice in its latest set of financial accounts.

According to a US Securities & Exchange Commission (SEC) filing covering the opening quarter of 2014, Lightwave Logic posted a net loss of just under $1 million on negligible sales, with the majority of that spending going on its research and development into electro-optic polymer materials and devices.

Commercialization effort
Although the firm signed a $20 million investor agreement with long-term backer the Lincoln Park Capital Fund just over a year ago, the filing – posted May 14 - raised doubts about Lightwave Logic’s ability to continue unless it was able to raise more capital.

But with the $3 million injection, CEO Thomas Zelibor said: “These funds will be used for research and development, general corporate purposes and to further the commercialization effort for our advanced organic nonlinear electro-optical polymer technology platform.”

Zelibor added in a letter to shareholders that he wanted the company to become “the Intel of photonic chips and devices”, by the targeting data centers used for cloud and social media services that are demanding greater bandwidth but which also need to reduce energy costs by improving operating efficiencies.

“The unprecedented explosion in demand for bandwidth has created an enormous opportunity for a replacement technology,” writes Zelibor, claiming that several device companies were now starting to look seriously at the viability of polymer-based photonics.

“Most of our discussions with potential customers have centered on their desire for innovative polymer waveguides, optical modules, transceivers and lower-cost packaging solutions,” he adds. “They are impressed by the potential for enormous built-in cost and performance advantages.”

Device focus
Zelibor says that the firm has now shifted its focus from basic chemistry to the development of photonic devices, with efforts centering on waveguide modulators, an all-optical router, optical switch and a spatial light modulator.

“Our technical team is currently putting together individual product timelines along with market sizes and detailed competitive comparisons,” concluded the CEO.

In March this year, Lightwave Logic began making a prototype hybrid silicon/organic transceiver, releasing the chip design to the OpSIS Center in Delaware, ahead of an anticipated delivery in early summer and subsequent testing.

“The OpSIS Center at the University of Delaware will be providing us with chips that we will process with various combinations of our electro-optic polymer systems,” stated the firm. “The initial application will target inter-data center interconnections of more than 10 kilometers. Our next design will utilize a different frequency and address the current bottleneck in the rack-to-server layer.”

The following month Lightwave Logic agreed a licensing deal with Corning to incorporate the materials giant’s organic electro-optical chromophores into its own portfolio of polymers, in a bid to improve their electro-optical activity.