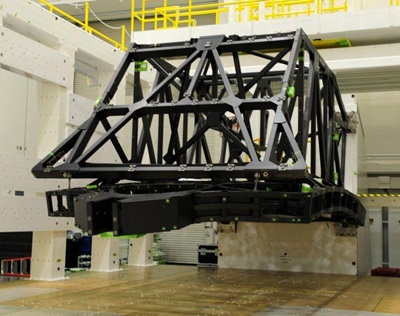 After JWST is launched in 2018, the PMBSS will support the 18 hexagonal beryllium segments that make up the telescope's 6.5 meter-diameter mirror, keeping it virtually still while instruments capture light from deep space.

The latest step comes three months after engineers finished assembling the four main scientific instruments and cameras that will sit at the heart of the telescope. The module containing those instruments is currently undergoing four months of tests in a thermal vacuum chamber at NASA’s Goddard Space Flight Center.

Lee Feinberg, NASA’s optical telescope element manager at Goddard, said of the latest development: "Static testing demonstrates the backplane has the structural integrity to withstand the forces and vibrations of launch and is the final test prior to starting the integration of the backplane with the rest of the telescope.”

The next steps in the project will see integration of the composite structures with deployment mechanisms to create the overall optical telescope element (OTE) structure. That will then be shipped to Goddard for integration with the telescope’s mirrors, and cryogenic testing of the PMBSS and mirror structure.

“Structural backbone”
Defense and aerospace contractor Northrop Grumman and Utah-based partner ATK completed the PMBSS testing. Scott Texter, who is the optical telescope element manager at Northrop Grumman, said: "This is the largest, most complex cryogenically stable structure humans have ever built."

"Completion of the static testing verifies it can hold the weight it is designed to hold. Now the structural backbone of the observatory is officially verified and ready for integration."

The PMBSS is designed to “unfurl” following the expected 2018 launch of the JWST from Arianespace's ELA-3 launch complex in French Guiana. The telescope will then be positioned at the second Lagrange point, approximately a million miles from Earth. In this elliptical orbit, it will be able to deploy a single shield to block out any interfering light from the Sun, Earth and Moon.

Despite its huge size, the JWST backplane weighs “only” 988 kilos, making it one of the most lightweight precision-alignment truss structures ever built. When deployed, it will support a payload and instruments more than three times its own weight.

ATK designed, engineered and constructed more than 10,000 parts for the backplane, using state-of-the-art composite and graphite materials to minimize both its weight and any changes in the shape of the telescope caused when one side is hotter than the other.

JWST’s instruments will be working at cryogenic temperatures, and the backplane must move less than 38 nm to meet the telescope's performance specifications.