Three out of four selections from the Institute of Physics panel are based around optics and photonics. 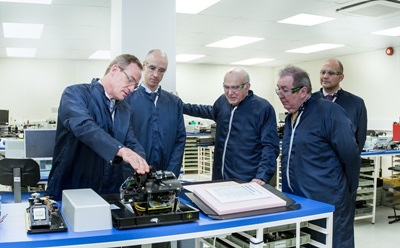 Three out of the four companies to win 2014 innovation awards from the Institute of Physics (IOP) have been recognized for their development of optics and photonics technology.

Gooch & Housego’s Torquay operation won for its development of acousto-optic components, which it sells under the “Fibre-Q” product line. According to the firm, the technology has created 23 jobs in the five years since it was launched, and generated millions of pounds in profitable sales.

Andrew Robertson, senior VP at Gooch & Housego’s Torquay-based systems technology group, said: “Winning this award provides recognition that by using our expertise in the field of photonics and detailed understanding of optical material characteristics, we can develop an innovative product with a great technical competitive advantage that precisely serves the needs of our customers in a wide variety of applications.”

For Gooch & Housego, the key application for the acousto-optic component has turned out to be in the fast-growing area of fiber lasers, which are now used in a vast range of industrial applications.

Founded back in 2006 by Alan Henderson, the company has developed a mid-infrared light source and detector combination that exploits the strong 4.26 µm absorption of CO2 gas molecules – a wavelength that is not absorbed by other common gases or water vapor.

Based on a narrow-bandgap gallium aluminum antimonide (GaAlSb) epitaxial material system, the LED sources and photodetectors consume just a few milliwatts of power, far less than the bulb and pyroelectric combinations that they are designed to replace.

It means that the low-power sensors can be powered using energy harvesting by an integrated solar cell, or last for several years when fitted with standard batteries.

Since being introduced three years ago, these sensors are said to have generated more than £1 million in profit for Gas Sensing Solutions, and created a dozen jobs at the company.

The dual-mode systems can use both semi-active laser and millimeter-wave guidance, and have been integrated with “Brimstone” missiles in operations over both Afghanistan and Libya. They are said to improve the precision of missile guidance, creating 180 jobs and earning MBDA more than £100 million in the process.

Initially, the dual-mode technology was developed through research funding from MBDA and the UK’s Ministry of Defence (MoD). The original Brimstone seeker used only millimeter-wave radar, but the addition of sensitive semi-active laser capability means that either guidance mode can be selected from the cockpit, as required.

While first used by Tornado fighter aircraft, the system is also suitable for use by unmanned drones, and MBDA says that in early 2014 it conducted trials with an MQ-9 remotely piloted aircraft in the US, scoring nine direct hits on targets including high-speed vehicles (as shown in video above). Last month, the MoD began integrating the latest incarnation of the dual-mode Brimstone missiles on board its Eurofighter Typhoon aircraft.

Summing up the awards, IOP president Frances Saunders said: “The successful application of physics creates businesses and industries that meet the widest range of needs – from precision manufacturing and energy generation to devices designed to help us better understand our environment, and those which aid our defense.”

“We have another remarkable selection of winners this year and I wish them all continuing success.”

The four winners will gather for an IOP-organized awards ceremony later this year.