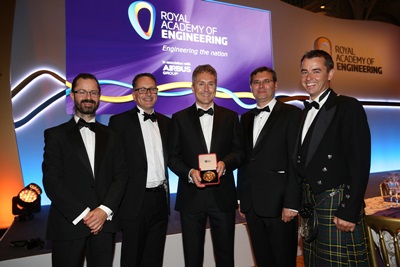 The firm, which beat off competition from engineering giant Rolls Royce and the QinetiQ fiber-optic sensing spin-out OptaSense, developed a system based on a variant of Raman spectroscopy that identifies the chemical composition of liquids sealed within non-metallic containers within seconds.

As a result, Cobalt’s “Insight100” airport security scanners are now installed in 65 airports across Europe, where they screen bottles of liquid to identify any potential explosives.

Cobalt CEO Paul Loeffen said of the RAE recognition: “This is a real coming of age for Cobalt. The MacRobert award is a fantastic accolade for the entire team and a real vote of confidence in the company.”

He added, “It is tremendously satisfying to take a research discovery from the laboratory and develop it into a viable commercial product which is already enhancing passenger safety at airports. Receiving this award is truly a great success for UK science and engineering.”

The award comes just as airport authorities across the region are set to increase security measures in response to a perceived new threat from the Middle East.

Probing deep
The concept of spatially offset Raman spectroscopy (SORS) – where a Raman signal can be recovered from below the surface of a sample – was first devised by Pavel Matousek, Cobalt’s chief scientific officer and a professor at the Central Laser Facility, part of the UK’s Science and Technology Facilities Council (STFC).

“It was very satisfying to uncover a new laser method with such wide range of applications and of such a high societal impact,” said Matousek. “Suddenly we were able to use this method to probe the chemical content of opaque bottles without opening them, and scan biological tissues non-invasively at a depth previously unimaginable.”

The RAE’s John Robinson, who chaired the MacRobert Award judging panel, said of the Raman tool: "The promise of this single fundamental innovation to improve the lives of millions of people in such a variety of ways meant Cobalt stood out in what has been a particularly competitive year for the MacRobert Award.

"Beyond the outstanding technical innovation itself, Cobalt also captured the judges' attention with its hearty ambition. A fast-growing yet humble SME, it is a shining example of the technology transfer process from UK research labs into a successful commercial enterprise. Cobalt represents the perfect marriage of innovation and entrepreneurship that the Academy is championing through its Engineering for Growth campaign."

The company recently told optics.org that it had expanded to around 40 employees, and now occupied around 150 m2 of production space – having grown from a headcount of only 12 based in two small units at the Rutherford-Appleton Laboratory's Electron Building in early 2011.

Diverse potential
Ian Shott, another member of the RAE judging panel and also chairman of its Enterprise Hub, said: "Cobalt's engineers have made a substantial breakthrough of global significance, and its fast-growing and very capable team is taking a considered, strategic approach to exploiting its potential in multiple markets. I believe they are on the cusp of explosive growth, with the potential for multi-million pound business offerings in at least two or three industry sectors.”

With the technology now deployed at eight out the ten largest airports in Europe – including London’s Heathrow and Gatwick hubs - the Insight100 technology is already helping to streamline the cumbersome restrictions on liquid carry-ons.

SORS should also prove useful in a number of other fields. Recent work has shown that it can be used to identify pigments in artwork non-destructively, while earlier clinical trials included diagnosis of the bone condition osteoporosis and also calcification in breast tissue that can be an early indication of cancer.

First presented in 1969, the RAE’s MacRobert Award is the longest-running national prize in the UK engineering sector, and is associated with spotting the ‘next big thing’ in new technologies. Designed to recognize outstanding innovation combined with commercial promise, its previous winners have included the CT scanner and light-emitting polymers.

The MacRobert Award was presented to Cobalt’s team by HRH The Princess Royal at the RAE’s annual dinner, held this year at the Royal Opera House in London. There to receive the RAE gold medal and a £50,000 cash prize were Loeffen and Matousek, as well as the company’s VP of product development Stuart Bonthron, data scientist Guy Maskall and COO Craig Tombling.