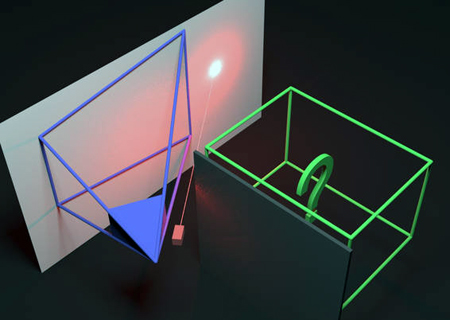 Scientists at the Uuniversities of Bonn, Germany, and British Columbia, Canada, have developed a novel camera system which can, in their words “see around a corner without a mirror”. Using diffusely reflected light, the system reconstructs the shapes of objects that are outside of the camera’s field of view. The German-Canadian research team this week reported their results at the international Conference for Computer Vision and Pattern Recognition (CVPR), in Columbus, OH, USA.

The technique works like this: red laser light is shone onto a wall; a camera records the scene, initially showing nothing more than a white wallpaper backdrop with a bright spot of light. As the system’s computer processes the image data, the outline of an object gradually appears on screen. Yet, the object is behind a partition and the camera has no direct view of it; instead it has effectively looked around the corner.

Prof. Matthias Hullin from the Institute of Computer Science at the University of Bonn explained, “This image is a reconstruction from diffusely scattered light. Our camera, combined with a mathematical procedure, enables us to virtually transform the wall into a mirror. The scattered light is used as a source of information.”

Hullin told optics.org that his team’s work had been inspired by earlier work at the MIT Media Lab (Cambridge, MA, USA). In 2012 researchers there caused a stir by demonstrating a camera that could see around corners. In a paper then published in Nature Communications, the MIT group produced recognizable 3-D images of a wooden figurine from outside their camera’s line of sight. But Hullin notes today that the MIT set-up was based on relatively expensive equipment, such as a femtosecond laser, and was very sensitive to stray light.

”Our key objective has been to build on the work perfomed by the MIT Media Lab but we wanted to reduce the cost and complexity of the hardware we use, and to replace the large effort necessary to process the data with relatively simple computation, “ he said. “The MIT experimental equipment had a likely cost of at least $0.5 million but our set up – with its off the shelf red laser – is much cheaper and more flexible.” 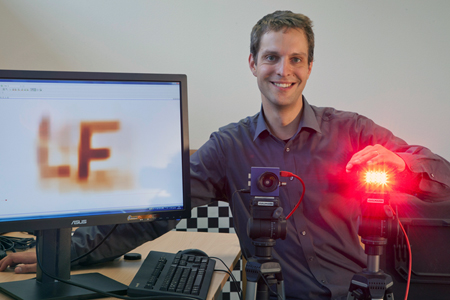 Matthias Hullin from the University of Bonn.

“Our aim is not so much to develop end-use applications for seeing round corners but to provide an economical and fundamental tool that other researchers could develop. Examples could be applications in vehicle driving systems or emergency recovery systems.”

In the Bonn approach, the red laser dot projected on the wall is a source of scattered light, which serves as the source of visual information. Some of this light, in a roundabout way, illuminates the object then falls back onto the wall and finally into the camera. Hullin added, "We are recording a kind of light echo, that is, time-resolved data, from which we can reconstruct the object."

To measure such echoes, a special camera system is required which Prof. Hullin has developed together with his colleagues at the University of British Columbia (Vancouver, Canada). In contrast to conventional cameras, it records not just the direction from which the light is coming but also how long it took the light to get from the source to the camera.

The technical complexity for this is comparatively low. Suitable sensors are found in depth image cameras as are used in certain video game controllers or for range measurements in the automotive field. The key challenge is to elicit the desired information from such time-of-flight measurements.

Based on an advanced mathematical model, Hullin and his colleagues, have developed a method which can obtain the desired information exclusively from what would usually be considered noise rather than signal. Since multipath light also originates from objects which are not at all in the field of view, the researchers can thus make visible what is virtually invisible.

The accuracy of this method has limits: results are still limited to rough outlines of shapes. However, the researchers assume that based on the rapid development of technical components and mathematical models, higher resolutions could soon be achieved. He concluded, “Our method is robust to ambient light and works for large room-sized scenes. It is significantly faster and less expensive than previous approaches using femtosecond lasers and streak cameras, and it does not require any moving parts.”

Matthew Peach is a contributing editor to optics.org/i>.