Researchers at the University of Arizona (UA) and Washington University in St. Louis are developing goggles that are designed to help surgeons remove cancerous growths more effectively, and reduce the chances of the disease recurring.

The team, led by Rongguang Liang at UA’s College of Optical Sciences, has just published details of a new dual-mode approach combining fluorescence and reflectance signals, having earlier presented the goggles concept at February’s BiOS 2014 symposium – part of the SPIE Photonics West event in San Francisco.

During the BiOS conference “Design and Quality for Biomedical Technologies”, Liang and colleagues described a wearable, fluorescence-based system for imaging tumors during surgeries to remove cancerous growths.

Their latest paper, published in The Optical Society (OSA) journal Optics Letters shows how the combination of near-infrared fluorescence – which highlights the bio-marked tumor cells – and visible light reflectance, which is used to image the contours of the tissue, could be combined in such goggles, or as a hand-held device.

In principle, the technology would enable surgeons to easily identify the full extent of tumors in real time, while they are operating on patients.

Liang, who is an SPIE Fellow and previously worked at the Kodak healthcare spin-off Carestream Health, said of the latest work: "Dual modality is the path forward because it has significant advantages over single modality."

Surging interest
Brian Applegate of Texas A&M University, who is a topical editor for Optics Letters, agrees. “Interest in multi-modal imaging technology has surged over the last ten years,” he said.

“People have realized that in order to better diagnose diseases like cancer, he says, you need information from a variety of sources, whether it's fluorescence imaging, optical imaging or biochemical markers.”

Applegate explains that by combining different imaging techniques, surgeons can gain a fuller picture of the tissue on which they are operating. "[It] could help surgeons make sure they remove every last bit of the tumor and as small amount of healthy tissue as possible,” he added.

Part of the difficulty with developing such multi-modal systems is that the two modes have conflicting imaging requirements. For example, capturing enough of the marked cells’ fluorescence tends to require a near-infrared camera with a wide aperture - but a large aperture also has a low depth of field, the opposite of what's needed for visible-light imaging.

"The other solution is to put two different imaging systems together side by side," Liang suggests. "But that makes the device bulky, heavy and not easy to use."

To get around the problem, Liang and his team designed an aperture filter featuring a disk-shaped center surrounded by a ring-shaped area. The center aperture lets in visible and near-infrared light, while the outer ring only transmits near-infrared light.

With the filter in place, the outer part is wide enough to let in enough near-infrared light to generate a useful fluorescence signal, while the center aperture is small enough to generate a large depth of field.

Liang’s team is now adapting the filter design so that it can be incorporated in the kind of lightweight goggles that a surgeon could wear comfortably while operating, as well as into a similar hand-held instrument. 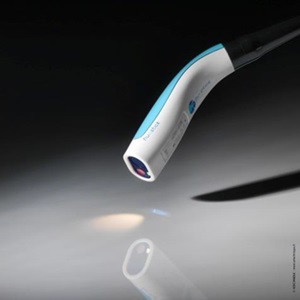 “Fluostick” identifies lymph modes and more
Other groups working on similar approaches include a team at the UK’s University of Oxford. In a collaboration with Oxford University NHS Trust, they have developed two such devices - one combining near-infrared fluorescence with a laparoscope, used for minimally invasive, or “keyhole” surgery, and a second, hand-held imaging system for open surgery.

In a BiOS 2014 paper, Boris Vojnovic and colleagues described a miniature color camera capable of collecting both a near-IR fluorescence and visible reflectance signal from multiple dyes used to mark tissue types.

According to the presentation abstract, they have demonstrated the system in operations on humans, as part of a clinical trial involving sentinel lymph node detection in gynecological cancers.

Meanwhile in France, a team involving the Grenoble start-up company Fluoptics has developed the “Fluostick”, a hand-held imager for fluorescence-guided surgery.

Launched last September, the laser-based technology is aimed at head, neck and cardiac surgeries, and is designed to help surgeons identify lymph nodes and tumors, and to characterize tissue perfusion (the amount of blood reaching an area of tissue).